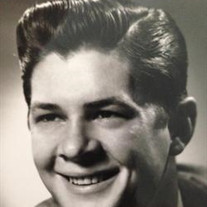 Gary Holt Salmon was born at Raymond, Alberta, Canada on September 28, 1933 to Scott Walker Salmon and Ruth Holt Salmon. Gary got his schooling in Raymond, went on to serve an LDS mission in November 1952 to the Eastern Canadian Mission, Gary dearly loved the Lord and lived his life in a way that he could serve the Lord and be a great example to those around him His love for the Lord continued to grow and increase throughout his life. He loved to play basketball and played basketball in high school and on Raymond Union Jacks team. He loved to ranch and worked with his dad and Uncle Carl on the fams and ranches while growing up. On June 29, 1955 he married his sweetheart Charlotte Arlene Graham in the Cardston Alberta Temple. They always ranched together. He is survived by his beloved wife Charlotte, children Terry Salmon, Charmayn (Wade) Smith, Becky (Bryce) Hall, Robert (Vonda) Salmon, and his five siblings, Elayne Butler, Kay (Kathleen) Salmon, Phyllis (Bert) Murdock, David (Monta) Salmon, and Glen Salmon. They have 21 grandchildren and 38 great grandchildren, and many nieces, nephews and in-laws. Gary loved his family very much and said that his children and grandchildren were his Crowning jewels. Gary served in many positions in The Church of JESUS Christ of Latterday Saints. He and Charlotte served an LDS mission in the Seoul Korea Temple. They have lived in many areas. They loved to buy a ranch - improve it, sell and buy another challenge. Gary knew the cattle business very well and helped a lot of other ranchers when they had a problem. He loved his horses; he always said that his horses "had to be good to work cows and good to look at." For the past fifteeen years they have spent their winters in Yuma, AZ and the summers travelling visiting their children. Gary died on May 21, 2015 in Layton, Utah. A Memorial will be held on Friday May 29th 2015 1:00 pm, at The Church of Jesus Christ of Latter-day Saints at 590 W 2000 N Layton, Utah.

Gary Holt Salmon was born at Raymond, Alberta, Canada on September 28, 1933 to Scott Walker Salmon and Ruth Holt Salmon. Gary got his schooling in Raymond, went on to serve an LDS mission in November 1952 to the Eastern Canadian Mission, Gary... View Obituary & Service Information

The family of Gary Holt Salmon created this Life Tributes page to make it easy to share your memories.