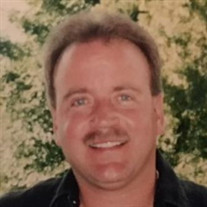 Gary John Steffen Gary Steffan, 57, our beloved father went to heaven on March 22, 2018. He was born June 9, 1960 in Chicago, Illinois, to Werner and Diane Steffen. He attended Clairemont High in San Diego, California, then he proudly served in the United States Air Force. Gary loved the sun, the ocean and to surf. He enjoyed snow/water skiing, fishing, camping, playing golf and baseball. He was an outgoing and fun guy who could fit in anywhere. During his active duty in the Air Force he served 13 tours, majority of them in the middle east war zones before he retired in 2004, from Hill Air Force Base, Utah. His favorite tour was Buchel, Germany in the 80’s. Gary married Coleen Steffen on February 11, 1995, and they had two sons but they later divorced. His proudest achievement was the birt of his sons, Trevor (17) and Matthew (12). Gary’s dream of being a Law Enforcement Officer was full-filled while in the military and after he retired. “Go Defenders” Gary is preceded in death by his mother, Diane. He is survived by his father, Warner Steffen; his brothers, Mark (59) and Brian (52). Services will be held on Friday, March 30, 2018, at 11:30 a.m. at Alpine Chapel, 254 W. 2675 N. Layton, Utah, followed by interment with Military Honors at Lindquist Mortuary on Fairfield Rd. in Layton. A special thanks to the Brighton Hospice Team they were truly a life line for our family. Also, to the Veterans Affairs Hospital in Salt Lake City, what true Professionals!!! Thank you from the bottom of our Hearts!

The family of Gary John Steffen created this Life Tributes page to make it easy to share your memories.