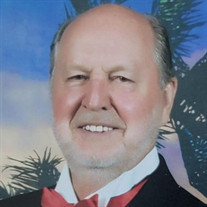 Gary LaRay Strong- loving husband, father, grandpa, and great grandpa- passed away at his home in Layton, Utah, on Wednesday, January 6, 2021 with his adoring wife at his side. He was 79. Born July 26, 1941 in Murray, Utah to Helen G. and Merlin D. Strong, Gary was the oldest of nine children. He had 7 brothers, Gile, Paul, Spencer, Jay, Bruce, Roy, Kurt and one sister Merlene Wulff. He was preceded in death by both parents and two brothers (Roy and Kurt). Gary was a very ambitious young man with incredible drive and a strong work ethic. Over the course of his lifetime, Gary owned and operated Ready Technology, Eagle Aerospace, and Howe Associates consulting firms. Gary was passionate about volunteering his time and talents to support the men and women serving our country at Hill Air Force Base. He served on the North Davis Chamber of Commerce and was a Charter sponsor of the US Air Force Memorial. In 1994 he served on the Base Realignment and Closure Committee working to keep the base open and save many jobs. He spent many years actively serving in the Air Force Association and was an Honorary Logstar Commander in 1995. In 2000, Gary served as the 419th Fighter Wing Air Force Reserve Civil Leader. Gary graduated from Davis High School in 1961 and joined the US Navy. After serving four years active duty 1961-1965, he served another two in the Navy Reserves and earned a Bachelor of Science degree in Engineering Technology. It was during his college career, Gary married the love of his life, Ivana Torvund, November 14, 1969. They had three children Sherri Sume (Tim), Gary Strong Jr., and Brandon Strong. In their younger years, Gary and Ivana were members of the Corvette Club of Utah. They enjoyed going to car shows and driving the 1963 Corvette he purchased for Ivana when she survived cancer. Gary loved working outside in his yard. He grew beautiful fresh roses and would surprise Ivana with them often. Gary was an avid golfer and treasured his time on the golf course with his son Brandon, and all his golf buddies. He especially enjoyed the 19th Hole! Gary’s family was the most important thing in his life. He loved taking the whole family on trips and spending time with his children and grandchildren. He was adored by his two granddaughters Ashley Wade (Brad) and Jessica Sume, and his grandson, Kyle Strong, was his best buddy! He loved picking Kyle up from school and watching him shoot hoops in the backyard. Gary was thrilled to become a “great-grandpa” six months ago and loved it when little Logan Wade came to visit. He will be remembered for his teasing jokes, his horrible puns, dancing with his granddaughters, his unfailing work ethic, his beautiful smile, and his willingness to always take the high road and see the best in people. Due to the increase in Covid-19 cases, Gary will be cremated. A celebration of his life will be held in his honor in July on his 80th birthday. The family wishes to thank everyone for the outpouring of love and support during this time. In lieu of flowers, please consider a tribute donation to the Utah Foodbank. To express condolences, please visit https://www.premierfuneral.com/obituaries/.

Gary LaRay Strong- loving husband, father, grandpa, and great grandpa- passed away at his home in Layton, Utah, on Wednesday, January 6, 2021 with his adoring wife at his side. He was 79. Born July 26, 1941 in Murray, Utah to Helen G. and Merlin... View Obituary & Service Information

The family of Gary LaRay Strong created this Life Tributes page to make it easy to share your memories.