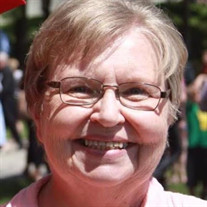 Anyone who knew Gayla Bass knows that she was an avid seamstress and crafting guru. She loved to create. In the tapestry that would become her life, Gayla’s first stitches were made when, on July 29, 1945 she was born to Arthur Theodore Watson and Rebecca Roskelley Watson in Twin Falls Idaho. It was in Twin Falls that she wove the pattern of who she was as the youngest of six children, 1 brother and 4 sisters. She started with a zest for life, enjoying her family and friends. As a young girl, Gayla joined the 4H club where she learned to sew handkerchiefs. She also learned to make many of her own clothes, and costumes for the school plays. She would quilt a pattern throughout her high school years as she participated in student assemblies, the Spanish club, Plays and stage crews, pep clubs, as well as playing the violin in the school orchestra. After graduating from Twin Falls High School, Gayla decided to enhance the tapestry of her life by attending Brigham Young University. There, she pursued a bachelor’s degree in early childhood development with a minor in sociology. It was in her sophomore year of college that her pattern would be enhanced by the addition of another’s joining her. She met Donald Charles Bass when they both worked as custodians on the 7 am crew at the Harris Fine Arts Center at BYU. Their lives would be forever entwined as Gayla received her endowments and on January 22, 1966, Donald and Gayla were sealed for time and all eternity in the Manti Temple. After weaving their threads into one, a new block of her quilt emerged as their family grew with the birth of their son John, then Diana, Jeanne, Christine, and Amy. Gayla always said that her family was her greatest treasure. As her children grew, Gayla’s professional quilt block flourished as well. She seemed to excel in everything she did. She taught preschool for several years and worked at Burrell’s Press Clipping service where she became a highly valued employee. Then she decided to focus on her creative side by working at The Cotton Shop. There, she taught sewing classes and helped people learn how to use their sewing machines. She also completed many wall hangings, blankets, and quilts which won several awards. In her later years she also worked as a reading specialist, at Canyon Elementary School, teaching kids who needed extra support. She had a 100% success rate and stitched her way into several hearts. Many parents thanked her every time they saw her, for the help and encouragement she willingly gave their children. Throughout all of her life, her most intricate stitching came in her relationship with her Savior, Jesus Christ, and her service to Him. Gayla had always been an active member of the Church of Jesus Christ of Latter Day Saints. She willingly served in her church as a Primary chorister, primary teacher, and also served in the Provo Temple baptistry with Don. Some of her happiest times were when she was serving as a Stake Volunteer Worker in the Relief Society presidency in the LDS Ward at the Utah State Mental Hospital. She loved those people and served them with a big smile on her face. Gayla embellished her tapestry with many hobbies. She was an avid reader, often reading a few books a month. Gayla’s delicious home cooking had a solid reputation. She loved to cook and experiment with recipes. She also perfected her ability to make fudge, much to the delight of her son and sons-in-law. She loved to craft, embroider, and crochet and loved to teach her grandkids these skills. Her skills enabled her to make several baby blessing gowns, one wedding dress, and 6000 Nauvoo Temple Dedication Handkerchiefs. Gayla could never keep still, stitching her way into many adventures. She loved going to Moab to visit Arches. She also loved visiting her family wherever they were: in Utah, Seattle, Minnesota, or Georgia. She loved going to the ocean, to tea at the Empress Hotel in Victoria, Canada, and going to Nauvoo, Illinois to see church history sights. As time progressed, Gayla’s stitching became more difficult but no less beautiful. Though she was diagnosed with Metastatic Melanoma cancer, she was determined to keep a positive outlook. She came back furiously time and again from surgeries, several illnesses, and even three bouts of pneumonia in a single year. These could have made her stop, but she was determined to keep going for her family which consisted of her husband, her 5 children, 23 grandchildren, and 11 great grandchildren. On December 14, 2020, the tapestry of her life was complete as she fulfilled her last stitches, succumbing to an illness that infected her body. She finished, knowing full well that this was not the last of her creations. She is now using an eternal golden thread to embellish, love, and help her family with their own personal tapestries in ways she can do more freely now than she could before. She is met in the eternal world by her parents, her brother and sisters, and nieces, nephews, and some most precious friends. She has left a wonderful legacy, stitched into our hearts. One that will last for eternity. Her last testimony solidified the life that her tapestry was... “I love the Lord.” Her funeral will be held on December 18, 2020 for immediate family only due to the covid pandemic. Interment will be in the Spanish Fork Cemetery.

Anyone who knew Gayla Bass knows that she was an avid seamstress and crafting guru. She loved to create. In the tapestry that would become her life, Gayla&#8217;s first stitches were made when, on July 29, 1945 she was born to Arthur... View Obituary & Service Information

The family of Gayla Watson Bass created this Life Tributes page to make it easy to share your memories.

Anyone who knew Gayla Bass knows that she was an avid seamstress...