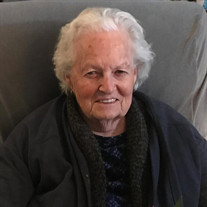 Gayle Frances Faler Callahan, 87, of Pleasant View, passed away on January 25, 2022 due to incidents of age. Gayle was born on October 28, 1934 to Helen Alice Petersen and Clair Gordon Purves in Seattle Washington, and adopted and raised by Leon Arthur and Inga Ada Marie Faler. After graduating from North Kitsap High School in 1952, she attended Brigham Young University. She married Arvin Baxter, and from that union had 2 children, son Kevin (Martha) Baxter, and daughter Jari Baxter Stokes. They later divorced. She met Everett Marvin "Pete" Callahan and they wed in 1962. They had a daughter, Tina (Garry) Hunter. She worked in food services, and owned or worked at restaurants in multiple states. She also worked in Yosemite National Park when the family lived in Oakhurst, California. She also founded Professional Lift Truck Service in Utah with her husband Pete Callahan. Gayle and Pete loved to travel, and spent time in their RV, going hunting and fishing. In 2005 they retired to Mount Pleasant Utah, near their favorite fishing holes. They enjoyed many winters in Arizona, spending time with dear, lifetime friends, Ann and Erv Jenness. Gayle was an accomplished cook, needleworker, and gardener. She was predeceased by her parents, brother George Purves, and husband Pete. She is survived by brother Neil (Faye) Fowler. Gayle is survived by her son and daughters, 10 grandchildren, and great grandchildren. Many thanks go out to all of her dear friends that did so much to serve and show love to her and her family. She was so blessed by all of your charitable service and friendship. Graveside services will be announced in the late spring.

Gayle Frances Faler Callahan, 87, of Pleasant View, passed away on January 25, 2022 due to incidents of age. Gayle was born on October 28, 1934 to Helen Alice Petersen and Clair Gordon Purves in Seattle Washington, and adopted and raised by... View Obituary & Service Information

The family of Gayle Frances Callahan created this Life Tributes page to make it easy to share your memories.