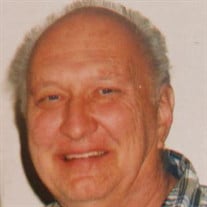 Gene Alma Warner June 15, 1940 - December 24, 2020 Gene Alma Warner, 80, passed away on December 24, 2020, in his home. He was born on June 15, 1940, in Ogden, Utah to James and Francis Warner. He spent his youth exploring Ogden, riding horses in Huntsville, and made friends, and created memories he shared with his children and grandchildren. He attended and graduated from Ogden High School where he participated in the ROTC. Following High School he joined the military, serving in the Army Corp of Engineers in Korea. After Korea he met and married H. LaRae Daw; they were sealed for time and all eternity in the Latter Day Saint Temple in Salt Lake City, Utah on June 5, 1964. Throughout his adult life, he took advantage of opportunities to attend school at Weber State University, where he studied Accounting/Business. After he completed his course work he worked for the Internal Revenue Service (IRS). After 20 years of working for the IRS, he switched careers and became a bus driver for underprivileged and special needs children, which brought him great joy. He was an active member of the Church Of Jesus Christ of Latter-day Saints (L.D.S.). He served as a ward clerk (for many, many, many years), was a home teacher (minister), and was a BYU Stake High Councilman. He served a mission with his beloved LaRae to Albuquerque, New Mexico. He and LaRae taught classes at the L.D.S. Institute on the campus of the University of New Mexico. It brought him great joy to serve a mission and it was made additionally special as he served with his wife. Gene loved to meet new people and serving in the Missionary Training Center and at the Provo City Center Temple, Pavilion allowed him to meet and serve young adults, fellow saints, and those who were not of his faith. He made friends everywhere he went. He is survived by his wife of 56 years, LaRae Daw Warner, and their eight children and 29 grandchildren. Children: Rebecca R. Merriam (Jonathan), California; Lisa M Strand (Scott), Oregon; Jennifer Anderson, Wyoming; J. Bryan Warner (Wendy), Utah; Todd A. Warner (Ayako), Utah; Jason H. Warner (Elaine), Utah; Scott J. Warner, Utah; Sarah Anne Morris (Jared), Arizona Dad says, “yucki”.

The family of Gene Alma Warner created this Life Tributes page to make it easy to share your memories.