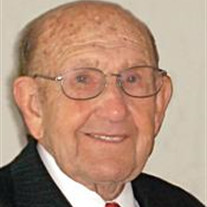 At age 92, Dad still had three wishes. But, when he passed away on March 13, 2012 in Orem, Utah, the chance to get up, run down the hall, and go for a long ride was gone. His most desired wish was to be reunited with Catherine, his beautiful wife of 71 years. With that reunion now complete, their eternal journey can count as the long ride, that's two done. While traveling this mortal life they had five children who each married a spouse that is considered in every way one of their own. In turn they were blessed with 16 grandchildren and 22 great grandchildren. His third wish was to be together as a family forever. It is up to us to make this third wish become a reality. Dad was a product of the experiences he had during the Great Depression and WWII. He developed strong beliefs of thrift, dedication, service and caring for the needs of others. He went about doing good in such a quiet way, that it was seldom noticed. It was a joy for him to serve without being openly recognized. While rarely talked about, he fought in WWII in the Pacific Theater where he was decorated for valor and awarded the Purple Heart for injury. He was a warrior, but not a lover of war, patriotic for peace and freedom, and honor bound to duty and service. This carried over in his chosen profession. As a master mechanic, he was given numerous awards for his expertise of the equipment he controlled. The 35 years of service to the Navy Supply Depot and GSA in Clearfield, Utah were years filled with pride and accomplishment. Never one to be idle, he worked off-hour jobs to support his family and build security for them. As children, we wanted for nothing. Forever busy, yet he always arranged his priorities to participate in the individual activities of each child. Sports, fishing, camping, boating, cheerleading events, and beauty contests are but a few of the things he made time for. As an active member of the LDS church he held callings where countless hours of work were expended to ensure that the finances and physical facilities were appropriate to the needs of the ward or stake. Community service was rendered frequently. He was an early volunteer board member of his credit union. Recognized as a man of integrity, his service helped to bring stability and trust in those early years of the credit union movement. Retirement afforded him more time for personal pleasures such as camping, fishing, gardening and travel. As a member of the Good Sam’s, he loved the outings, the chance to help others, and to plan fun and unusual events. His family and friends loved him for his gentle nature, his patience, selflessness, generosity and service. Although he was less mobile in the last year, he used his many talents to bless and bring smiles to the people that assisted him with his needs. We express thanks to all the “angels” who attended him at the rehab and assisted living facilities where he has lived. He will be missed, but remembered, honored, and celebrated as a foundation upon which we can build our lives to be that forever family he desires. Born Oct 28, 1919 in Mt. Pleasant, Utah to Chass Sanderson and Harriette Estella Poulson Clement. Married July 3, 1940 to Catherine Ann Mendenhall. Children are LeAnn (Dennis) Neuenschwander, David (Mary Beth) Clement, Kathleen (Douglas) Wilson, Robert (LaNea) Clement, Lisa (Rusty) Shaw. He was preceded in death by his wife Catherine Ann and daughter LeAnn. Services will be held March 24, 2012 at 12:00 PM at the Hobble Creek 4th Ward chapel, 1460 E. 900 S. Springville, Utah. A viewing will be held at 10:00 AM prior to the service at the same location. A viewing in Ogden will be held on Thursday, March 22 from 6:00 PM – 8:00 PM at the Washington Terrace 2nd Ward chapel 4210 S. 300 W. Riverdale, Utah. Interment will be in the Springville Evergreen Cemetery. Online condolences for the family may be sent to www.premierfuneral.com Lee Clement inspires one to be a doer, not just a hearer only.

At age 92, Dad still had three wishes. But, when he passed away on March 13, 2012 in Orem, Utah, the chance to get up, run down the hall, and go for a long ride was gone. His most desired wish was to be reunited with Catherine, his beautiful... View Obituary & Service Information

The family of George Leland Clement created this Life Tributes page to make it easy to share your memories.