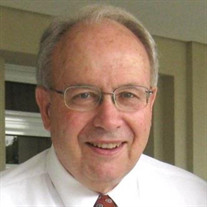 George Marcus Dover III, Mark, passed away on November 4, 2020 in Ogden, Utah, due to complications related to Alzheimer’s disease. He was the second son of George Marcus Dover, Jr. and Ilene Brown Dover. He was born on May 4, 1942, in Lovell, Wyoming and moved with his family to Cody, Wyoming in 1945. The family owned Cody Laundry and Dry Cleaning. For several years as a teenager, Mark drove the daily run up North Fork collecting dirty laundry and delivering clean laundry for the vacation lodges located between Cody and Yellowstone’s East Gate. He loved telling stories of that special time in his life and the principles of honesty and hard work he learned from his Dad. Mark took pride in becoming an Eagle Scout and attending the National Jamboree at Valley Forge. In high school he was active in sports, speech and drama, leadership, and accompanied the Girls’ Choir. Mark served a Spanish American mission for the Church of Jesus Christ of Latter-day Saints. He loved to tell how he started his mission in Texas but completed it in New York as one of six Spanish speaking missionaries sent to the Eastern States Mission to work with Spanish speaking referrals from the New York World’s Fair. Mark met Merrillyn Lewis, from Montpelier, Idaho, at BYU in fall of 1965. They were married on June 3, 1966 in the Logan Temple. He graduated from BYU the next year with a BS in Accounting, certified as a Public Accountant, and joined the Haskins & Sells accounting firm in their San Juan, Puerto Rico office where he worked for five years. From 1971 to 1987 he worked as Vice President of Finance and Administration for Bernina Sewing Machine Co. in North Salt Lake, importers of Bernina for the Western United States. He worked for a brief time as a System and Control Specialist, Audit Dept., Church of Jesus Christ of Latter-day Saints. During this time he especially enjoyed assignments in South America where he could refresh his Spanish skills. From 1991 through 2005, he worked as a Legal Administrator in the Salt Lake City area and in Augusta, Georgia. In 1997 he served for a year as President of the Beehive Chapter of the Association of Legal Administrators. Then in 2006, as he moved into retirement, Mark considered it a wonderful opportunity to work several years with sons in their business in Arizona. Mark was a devoted member of the Church of Jesus Christ of Latter-day Saints and served faithfully in numerous calling in the church throughout his life, including as Bishop while living in Georgia. In Arizona, Mark and Merrillyn enjoyed serving together in the Mesa Temple. They loved the opportunity to return to Mark’s hometown of Cody for two summers-2009 and 2011- as Church Service Missionaries at the Cody Mural Visitors Center. In October 2011, they accepted a call to serve as Member, Leader Support Missionaries for 22 months representing the Church of Jesus Christ of Latter-day Saints in the Philippine, Cebu mission. They were then delighted to serve for one more summer in Cody as missionaries at the Cody Mural. Mark had a deep and abiding testimony of Jesus Christ and the restoration of His Gospel on the earth. He considered himself blessed to have lived in so many places, to have worked with, and to have formed close friendships with many amazing individuals. Mark loved his family. He loved playing board and card games. He enjoyed entertaining with stories of Cody and Yellowstone. He loved watching grandchildren’s games, recitals, and performances. His mashed potato chocolate cake and potato salad with apples were often requested for family parties and always cheerfully provided. His quick sense of humor and ability to say just the right thing lightened many stressful situations. He couldn’t listen to his girls sing without crying. He is loved and will be greatly missed. He is survived by his wife of 54 years, Merrillyn; his 6 children and their spouses – Mindy (Brandon) Janis, George (Susie) Dover, Meghan (Jeff) Parrish, Greg (Natalie) Dover, Maryl (Travis) Sommer, Gerron (Kim) Dover; his 25 grandchildren and 11 great-grandchildren; his brother Dick (Jan) Dover and sister Tammy (Don) Jensen. He was preceded in death by his parents. We extend our gratitude and appreciation to Hearts for Hospice, Whisper Cove Memory Care, and Avamere Mountain Ridge Memory Care for compassionate ministering and end of life care. A family viewing will be held on Friday, 6 November 2020 at 5:00 PM¬ at Premier Funeral Services, 5335 South 1950 West, Roy, UT. Mark will be laid to rest in the Kaysville Cemetery, 425 East Crestwood Rd, Kaysville, UT, following a 9:00 AM graveside service for immediate family. Online guestbook available at www.premierfuneral.com.

George Marcus Dover III, Mark, passed away on November 4, 2020 in Ogden, Utah, due to complications related to Alzheimer&#8217;s disease. He was the second son of George Marcus Dover, Jr. and Ilene Brown Dover. He was born on May 4, 1942, in... View Obituary & Service Information

The family of George Marcus Dover III created this Life Tributes page to make it easy to share your memories.