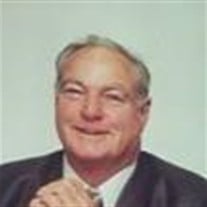 George Robert Eatough October 17, 1944-July 14, 2015 Our “Papa” the best husband, father, son, brother, uncle, and friend the world has ever known finished his battle with cancer Thursday, July 14, 2016. His loving wife and family were by his side as he made his journey to his heavenly home. He loved four wheeling in his side-by-side (the blue razor), fishing, and shooting, whether it was his gun or on a pool table. Everything he did, he wanted his friends and family there including his family projects. He cherished those relationships most. He loved camping and traveling with his parents and the ones he loved. He also loved watching wrestling with his wife and old western movies. He always stood by his loving, crazy family. He served as an active member in the Vietnam War through the Naval Forces. He was a man of many trades included, but not limited to: mowing lawns, underwater welding, taxi and truck driving. He went to school to be a mechanic and worked on everyone’s cars. He is preceded in death by his belated wife Tonia Eatough (Nana) and his parents Viola and Richard Eatough. He is survived by his wife, Mary Eatough; his three sons Shane (Sherri), Shaun (Sara), and Aaron; his eight daughters: Sue, Sharrie (Mike), Michelle J., Shannon (Bryan), Carrie (Roy), Gena (John), Melissa (Lonnie), and Michelle L.; his siblings Francine (Herbert), Melanie (Gordon), and Richard (Carole); his 26 grandchildren and his 29 great-grandchildren. Services will be held at the American Legion 345 South Depot St. Clearfield, Utah 3:00 PM July 25th 2016.

The family of George Robert Eatough created this Life Tributes page to make it easy to share your memories.