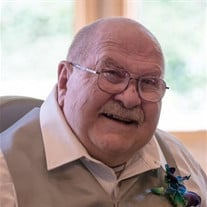 George Andrew Holiday 1938 - 2018 George Andrew Holiday also known as Pappa "G". Passed away on Thursday May 31, 2018. He was born on October 5, 1938 in Los Angeles, California. From high school, he served our great country as a Marine. Soon after he met his sweetheart Marcia Duff aka "Mamma" which began the truest love story and adventure of his life. George and Marcia were married August 30, 1958 at the early age of 19. They later moved to Northern California where they raised their (3) children Nancy, Christie, and Shawn. Pappa "G" co-owned Hy-Fy Muffler Service, whose slogan was, “No Muff Too Tough, We Dive 'Til 5”. He was a hot rod and muscle car fanatic. Especially, when it came to his 1963- Chevy Biscayne with a 383 stroker engine, ghost flames and slammed to the "weeds". Pappa "G" was an amazing husband, father, and grandfather who brought joy and love into everyone’s life he touched. There was never a dull moment with his giant jokester personality and being the fairytale romantic for his “mamma” wife and forever partner Marcia. His cheesy but charismatic smile would light up a room and you couldn’t help but feel the energy coming from his infectious deep belly body rolling laugh. He enjoyed all outdoor activities near the water and in his younger years often visited his favorite places; Laguna Beach, Lake Shasta and the Colorado River. He loved his dogs, (Buttons, Apollo and Zeus) reading books, watching old westerns, music, and a passion for telling old stories. A few of his hobbies were traveling, gardening, dancing, and pheasant hunting. George had an enormous sweet tooth his favorite being chocolate cake. He sang the most amazing cheerful “Happy Birthday” that will always play in our hearts. Most of all, Pappa "G" was a family man who loved life fiercely, had a heart of gold and an outlook of positivity no matter the situation, top notch traits we can all hope to aspire. Pappa "G" left in peace with his sweet-heart and family by his side, to join his mother (Ada), father (Reginald), brother (Sonny) and sister (Marion). Pappa "G" is survived by his wife: Marcia Holiday, his daughters Nancy Blanco (Daniel) and Christie Rice (Tim) and his son Shawn Holiday (Kelly), his grand-children Kimberly Carpenter(George), Bryan Capilli (Megan), Hailey Capilli (Trace), Dylan Mac Donald, Luke Holiday and Olivia Holiday. A memorial service will be held in his honor on Friday June 8, 2018 at 2:00 P.M. at Camp Williams Veterans Memorial Park, 17111 South Camp Williams Road, Bluffdale, Utah. The family wishes to express their gratitude to all of the staff at Harmony Hospice. (Larry, Alissa and Chaplin, Laurie) who our father loved.

George Andrew Holiday 1938 - 2018 George Andrew Holiday also known as Pappa "G". Passed away on Thursday May 31, 2018. He was born on October 5, 1938 in Los Angeles, California. From high school, he served our great country as a Marine. Soon... View Obituary & Service Information

The family of George Andrew Holiday created this Life Tributes page to make it easy to share your memories.