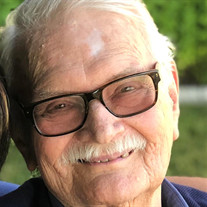 George Wesley Johnson, Jr 1932 - 2018 George Wesley Johnson, Jr, husband of Marian Ashby Johnson and father of Cynthia (CiCi), Karolyn (Kye), George III, and Benjamin, and grandfather of 17 grand/great-grandchildren passed away peacefully of natural causes at age 86, surrounded by loved ones on Friday, November 16, 2018. Though Wes was primarily proud of his family, he might have been more well-known for his extraordinary life and notable academic achievements. An extremely gifted writer, educator, orator, editor, and cartoonist, Wes, at age 9, created his own weekly 5-cent neighborhood news publication. Throughout High School (North Phoenix) as junior and senior class presidents, he wrote, edited, and created cartoons that poked good-humoredly at the staff and student body. Wes was accepted to attend Harvard University, but – unthinkably – asked the admissions department to defer enrollment for a year so he could attend Brigham Young University in the footsteps of his parents and, like his father, rushed the Samuel Hall Society as a Goldbricker. For his sophomore year, Wes continued his education at Harvard and served on the Harvard Lampoon, where he worked with a number of influential writers, editors, and thinkers, including John Updike. In his junior year, he deferred his studies for 2½ years to serve a mission in Belgium and France for the Church of Jesus Christ of Latter-day Saints. While serving a mission, Wes became interested in French history and culture. After graduating from Harvard, Wes completed a PhD in History at Columbia University and advanced studies at the University of Paris-Sorbonne. In New York, he met and married a beautiful young lady from Utah, Marian Ashby. During his career, Wes was awarded Ford and Rockefeller Foundation grants among many others that impacted his work in West African, Public, Business, Urban, and Latter-day Saint histories. His pivotal work on the French-speaking, West-African country of Senegal made a significant impact on the dialogue of African Americans that he was working with in New York and in France. During his career, Wes wrote many books and articles and founded two successful academic journals that continue to the present, including Dialogue, A Journal of Mormon Thought (along with Eugene England) and The Public Historian: Official Journal of The National Council for Public History (University of California Press). During his career, Wes taught at Stanford University, University of California-Santa Barbara, Arizona State University, and Brigham Young University. After retiring from BYU in 1997, Wes continued his work on the Outmigration Project by focusing on Mormons outmigrating from the Mormon corridor in 20th and 21st centuries. Wes promoted the incalculable value of history, and what it meant to religions, businesses, and families. He mentored dozens of graduate students through the years, many of whom were grateful and credited him for the completion of their theses and dissertations. He was a real-life Indiana Jones, in that he was a teacher, but also someone who loved the adventure of doing real-life research in the field. Many have said Wes was one of the smartest people they have ever known, having an unmatched command of European, West African, and American contexts. He inspired others with his imagination and creativity. In short, he was a visionary. As a father, he was always there for his children. He offered a listening ear, invited lively discussion, and facilitated decisions. He could draw a dead-on caricature of just about any silly face you could think of, told amazing stories of Bushy Tail and The Night Before Christmas, knew how to dress beautifully, could walk faster and farther through any museum, hated sweeping or turning anything with a screwdriver, wore his sweater inside out and backwards (just to test you), and could forgive you of just about anything if you gave him an hour or two to digest it. He was tireless and never complained about how hard he was working, because after all, he wasn’t working because he was living his passion! He made everyone else around him feel like they were standing still, even if they were working like mad. We will miss him terribly, but his energy, his crazy, ridiculous demand for more and for better will always be with us. Perhaps the greatest lesson he taught us was this, “Long shots are never as long as you think; they’re always worth going after. Why the he-- not?” Thanks Dad! Services in honor of Wes will be held at the Edgemont 14th Ward Meeting House, 4220 Foothill Dr., Provo. The viewing will take place on Tuesday, November 20, 2018 from 9:45 to 10:45am with funeral services at 11:00am.

The family of George Wesley Johnson created this Life Tributes page to make it easy to share your memories.