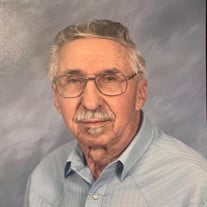 George Anthony LaDamus, 89, passed away peacefully of natural causes on November 7, 2020 at Grove Creek Assisted Living in Lindon, Utah. His family (children, grandchildren, and great-grandchildren) were blessed to be able to spend time sharing love and laughs with him before the end of his earthly journey. He was born on April 11, 1931 in Pueblo, Colorado to Andrew (Andy) and Anna (Felcosy) LaDamus. George grew up in Pueblo, Colorado. After high school, he joined the U.S. Navy in 1951. He proudly served during the Korean War aboard the USS Cascade and was the recipient of the National Defense Service and Navy Occupation Service Medals. He was discharged in 1954, achieving the rank of Gunner’s Mate Third Class. George began work as an automotive mechanic. He was proficient repairing “anything with an engine” including cars, diesel trucks, motorcycles, boats and airplanes. He was also a talented automotive painter. He earned his private pilot’s license as well as becoming a Flight Instructor and logged over 10,000 flight hours. Many weekends were spent either teaching flight lessons or painting vehicles. Later in his career, he began working at power plants, ultimately retiring from the Intermountain Power Project in Delta, Utah as Asst. Maintenance Superintendent. In retirement, he was able to devote more time to family and his love of flying. He built 2 homebuilt airplanes. He also enjoyed fishing, golfing, gambling and giving people nicknames. His unique sense of humor was an acquired taste. Few people were left wondering what he was thinking, but those that knew him well loved him. George married Marianna Russo in 1952 in New Brunswick, New Jersey. They were happily married for 53 years. As Marianna battled cancer later in life, George was her devoted primary caregiver. He was a faithful member of the Catholic Church and served in many positions. He was especially proud of his involvement in helping to build a new Catholic Church (St. John Bosco) in Delta, Utah. George rejoins his loved ones – his spouse Marianna, his parents Andy and Anna, siblings Roy, Helene, Dorothy, Ernest and Betty, and his great-granddaughter Lucy Ever Kunz. George is survived by his daughter, Annamaria LaDamus of Fillmore, Utah, son Gerard (Kimberly) LaDamus of Nephi, Utah, son George II (Carol) LaDamus of Bountiful, Utah; 16 grandchildren and 30 great-grandchildren. A memorial service will be held at Premier Funeral Services, 67 E 8000 S, Midvale, Utah at 2 pm, November 10. The service will also be live-streamed. Please contact one of the children for details. Interment will be at Mount Calvary Catholic Cemetery in Salt Lake City, Utah at a later date. The family is especially grateful to the extraordinary caregivers at Grove Creek Assisted Living and Rocky Mountain Care Hospice. In lieu of flowers the family requests memorial donations be made to St. Jude Children’s Research Hospital. Condolences may be left on George Anthony LaDamus’ online guest book at www.premierfuneral.com.

The family of George Anthony LaDamus created this Life Tributes page to make it easy to share your memories.