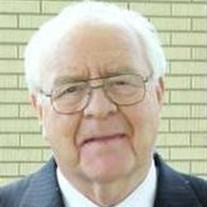 Our wonderful husband, father, grandfather, brother, uncle, and friend, George Clyde Peacock, passed away December 13, 2014 due to complications from Alzheimer’s at the Central Utah Veterans Home in Payson, Utah. George was born August 4, 1937 to Ralph Crawford and Maggie Lenore Jensen Peacock in Orangeville, Utah, and was the fourth of five children. As a young man, he went to school and worked throughout Orangeville, then graduated from South Emery High School in May 1955. He then went on to serve a mission for the Church of Jesus Christ of Latter-day Saints in the Central States Mission (Missouri, Oklahoma, and Arkansas) from 1958 to 1960. He was inducted into the US Army in the spring of 1961. After basic training in Fort Ord, California, he went on to advanced training in communications in Fort Gordon Signal School in Georgia. After graduating from Fort Gordon, he received orders to go to South Vietnam and was stationed in Nah Trang for the remainder of his time in the Army. He received an honorable discharge from the Army in May 1963. Throughout his mission and military service, he was sending letters back and forth to Kaye Mortenson from Emery, Utah, who he had met when she was still in high school. George and Kaye fell in love, and became engaged before shipping out to South Vietnam. They were sealed for time and all eternity on July 5th, 1963 in the Manti, Utah temple. George and Kaye started their life together in Salt Lake City, then moved to Murray, and after buying a home moved to Sandy, Utah where all eight of their children grew up. Home life was noisy and busy, but holds a lot of wonderful memories for his family. During this time, he worked as a billing clerk for IML Freight until the business was closed. After this, he worked for the University of Utah Hospital until retiring in 2002. George was an active member of the church, and served in many callings; the most notable being the Executive Secretary to seven bishops. He was an avid fisherman who loved working in the garden, listening to his music, and making sure the kids got their chores done. He thoroughly enjoyed Road Runner cartoons, original Star Trek and M*A*S*H episodes, and never missed the annual showing of the animated holiday special of “How the Grinch Stole Christmas”. He was always willing to listen, lend a hand to those who needed it, and had his “shoulder to the wheel” every day. He is survived by his wife, Kaye Mortenson Peacock; his sister Nelda Peacock Wilson; his children Carol DaNeen, Douglas R. (Sherry), Darren G. (Heather), Kaylene, Russell E., Donald M., Danial K. (Maggie), and Kimball S. (Jennifer); 11 grandchildren, and many nieces and nephews, family and friends. George was preceded in death by his parents, his brothers Vernon Ralph and LaVar William Peacock, and his sister Leah Peacock Pendelton. Many thanks and gratitude to the doctors, nurses, and staff at the VA Hospital in Salt Lake City, and especially the floor and hospice nurses at the Central Utah Veterans Home in Payson, Utah, for their care and kindness in the last months of his life. Funeral services will be held Friday, December 19th at 12:00 pm at the Sandy Utah Mount Jordan Stake building, located at 9331 South 300 East in Sandy, Utah, with a viewing before the services from 10:00 to 11:45 am. There will also be a viewing on Thursday, December 18th from 7:00 to 9:00pm in the same building.

The family of George Clyde Peacock created this Life Tributes page to make it easy to share your memories.