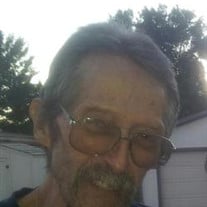 George Nicholas Luciano Romero was born August 2, 1943 to Nicholas and Edith Romero. Jesus called George home on September 17, 2014. George was an Army Vietnam Veteran and after his Honorable Discharge, found his calling as a school bus driver for 21 years at Granite School District where he retired in 1995. He loved to watch sports, coaching baseball and each summer, he and his family would be found at the baseball park enjoying their family pastime. Winter sports kept him busy, because he had to keep up with his son Georgie at wrestling tournaments, and had to watch the Jazz and Broncos. He also enjoyed fishing, taking weekend trips to Wendover, family time, board and card games and Mexican food. On May 2, 1981, George and Ramona wed and on October 2nd they had their oldest child George Arthur Romero. Eighteen months later, they were blessed with a second child, Melissa Ann Romero. He is survived by the love of his life, Ramona, his two children George (Lyse) and Melissa (Robert), his four Grandchildren, Makenzie, Allison, Aubrey and Maximilian, his sister Phyllis Kelsch, Uncle Gilbert and Fred and many nieces and nephews. He is preceded in death by his parents Nicholas Romero, Edith Rivera, his brother Joseph Garcia and nephew Jeff Garcia, and many aunts, uncles and cousins. Memorial Services will be at 11:00 a.m. on Monday, September 22, 2014 at the Trinity United Methodist Church, 5415 South 4290 West, Kearns, UT. A fellowship will be from 9:30 to 10:45 a.m. prior to the services. In lieu of flowers, please make donations to the family. The family would like to thank Canyon Hospice Care, especially Kimmie for her love and care.

George Nicholas Luciano Romero was born August 2, 1943 to Nicholas and Edith Romero. Jesus called George home on September 17, 2014. George was an Army Vietnam Veteran and after his Honorable Discharge, found his calling as a school bus... View Obituary & Service Information

The family of George L Romero created this Life Tributes page to make it easy to share your memories.