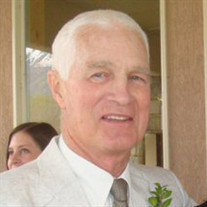 George Selfridge Smith, the patriarch of our family, passed away on Sunday, April 28th 2019, surrounded by loved ones. George was born July 5, 1934, in Long Beach, CA and was raised by his goodly parents, LCdr Horatio Donald Smith of the US Navy and Bessie Maude Mendham Smith, in Santa Monica, CA. He joined the army at 20 years old, around the time of the Korean War. While in the army he served as a Supply Sergeant at Fort Ord. George was baptized a member of the Church of Jesus Christ of Latter-Day Saints at the age of 27 in Palo Alto, CA. Upon his baptism he served in many callings within the church. Assistant Ward Clerk, Elders Quorum President, two stake missions, Stake Mission President as well as numerous other positions. During this time, he and his wife at the time had 4 children (3 sons and a daughter). In the mid 1990’she relocated to Provo with his main desire to be “Sealed For Time and Eternity” to that very special “Eternal Companion”. And he did! He married Mary Roberts in the Provo Temple on June 24, 2004. For years, he and his Eternal Companion worked in the Provo temple and never missed an opportunity to serve. He was a unique personality. Work was his play. (What do you mean your dad didn’t keep a bulldozer in the yard ready for whenever it was necessary?). A man of great fortitude, and unbending character, we’ve all enhanced our grip on life’s most difficult lessons due to his steadfast tenacity to endure until the job is done. He loved his whole family very much, kept his commitments, always looked to help and do right by people and was honest and true to his word until the very end. Our hearts go out today in tribute to a man who was always fair and meant well to all mankind. He is survived by his eternal companion Mary; 2 sons and one daughter: Lance, Cortney (Remy) and Nicole (Jason) Boothe; 8 step-children; numerous grandchildren and great-grandchildren. He was preceded in death by his son, Conrad; his parents and one sister. Funeral services will be held at 10:00 a.m., Saturday, May 11, 2019 at the LDS Chapel, 200 North 1051 East, Orem, Utah. The viewing will be held from 9:00-9:45 a.m. prior to services. Interment, Eastlawn Memorial Hills.

George Selfridge Smith, the patriarch of our family, passed away on Sunday, April 28th 2019, surrounded by loved ones. George was born July 5, 1934, in Long Beach, CA and was raised by his goodly parents, LCdr Horatio Donald Smith of the US... View Obituary & Service Information

The family of George Selfridge Smith created this Life Tributes page to make it easy to share your memories.

George Selfridge Smith, the patriarch of our family, passed away...