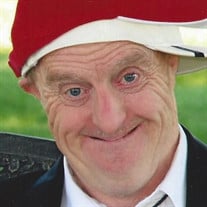 George Stallings, beloved brother and uncle, 65, died January 25, 2017, and was drafted to play in the HBL (Heavenly Basketball League). George was born to Lowell G. and Margaret Grow Stallings and grew up working on the family dairy farm in Eden. He milked cows, hauled hay, bedded the sheds and when the work was done, he played basketball on the driveway or rode his red bike to Grandma Kate’s where she had a second dinner of fried chicken and apple pie awaiting him. He rode Lou Burley’s bus to Ogden to attend Weber Education Center for many years. Lou was his special friend. 03 George loved to read the newspaper and watch football. He was a die-hard Dallas Cowboys fan and kept up on college basketball. He loved baseball, bowling, fishing, dancing and snowshoeing. There was nothing he loved more than a good free-for-all wrestling match with his nephews. George had many friends who remembered his birthday, made him smile, and put up with his teasing. His water color painting class with Jaime Capener was a highlight of his life. He was a faithful member of The Church of Jesus Christ of Latter-day Saints. Thanks to all of you who reached out to George in friendship and especially to those who stood up for him in the face of social injustice and discrimination. The family would like to thank so many who cared for George, including the staff and residents of Stoney Brooke of Eden for their friendship and care. Thanks to Kelci, Curry, Dee, and all the Brighton Hospice staff. Thanks to Deaune at Comfort Keepers. George is survived by his sisters: Jan Wight (Richard), Sharon Vause (Brad), Sandra Jenkins (Dave), all of Eden, and many nieces and nephews. He was preceded in death by his parents. A memorial service celebrated George’s life on Saturday, January 28, at 11 a.m. at the Huntsville Stake Center, 6500 E 1900 N, Eden, with a viewing from 9:30-10:45 a.m. Interment took place in the Eden Mountain View Cemetery.

George Stallings, beloved brother and uncle, 65, died January 25, 2017, and was drafted to play in the HBL (Heavenly Basketball League). George was born to Lowell G. and Margaret Grow Stallings and grew up working on the family dairy farm in... View Obituary & Service Information

The family of George Stallings created this Life Tributes page to make it easy to share your memories.