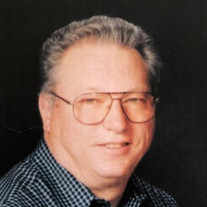 George Lambert Wilson George was born in Globe, Arizona on January 12, 1943, son of Fred and Mable Wilson. He was the youngest brother of Billee Louise, Fred, and Norman. He enjoyed a carefree childhood, searching for arrowheads and participating in other outdoors adventures. He eventually forgave his brothers for tying him to a tree as a BB gun target and throwing him over the wall of the cemetery at night then running away for him to get out himself. George moved to California as a young kid and became lifelong friends with Glenn Embry, whom he later named his first and only son after. They shared a passion for geology and flying planes. After graduating from high school in La Mesa, California, he took art classes at the local university. He didn’t love the education side of art, but he had a talent for drawing, calligraphy and wood carving that his family enjoyed over the years. George was a bit of a rebellious teen, but wrecking his Austin-Healey sports car encouraged him to find some focus for his future. After a stint with the Air Force working on planes, he learned to work on VWs with his brother, Fred. He continued that trade when he moved to Provo, Utah. Later he worked for US Steel and Geneva Steel, then closed out his career destroying biological weapons for Deseret Chemical in Tooele. He could fix anything mechanical! George married Kathleen Cox on Feb 24, 1968 and they were sealed in the Salt Lake City Temple the following year. They raised four wonderful children - Jennifer, Sarah, Shauna, and Glenn. (A dozen grandchildren and a couple of great grandsons at this point.) After the passing of his wife, George and Carol Marvin were married in 2013, adding Carol’s children and grandchildren to the family that George cared deeply for. He enjoyed serving an indexing mission for the Church of Jesus Christ of Latter-Day Saints as well as a service mission reading to children at Northridge Elementary who were struggling. During his free time he was a voracious reader, with a broad spectrum of interests. He checked out over 900 novels from the Orem Public Library since 1984, when he opened his account. In addition he loved his subscriptions to National Geographic, Reader’s Digest and read a countless amount of novels, when he discovered the ease of reading from a Kindle. There wasn’t a subject that he didn’t seem to know an awful lot about. He was a gentle giant who was intelligent, wise, kind, and loving. George will be laid to rest next to Kathy in the Orem City Cemetery. He will be greatly missed until we see him again! Church location - 1674 N 200 W Orem Viewing from 9am to 10:30 Funeral Service from 11am to 12 on Friday, September 18, 2020 Interment at Orem City Cemetery Family and close friends lunch to follow at 457 E 1500 N Orem Zoom invite for funeral Cory Little is inviting you to a scheduled Zoom meeting. Topic: George Wilson Funeral Time: Sep 18, 2020 11:00 AM Mountain Time (US and Canada) Join Zoom Meeting https://uetn-org.zoom.us/j/93992890213?pwd=dmYvdE5hUWtCbzVEU3pCRlBiVTk3UT09 Meeting ID: 939 9289 0213 Passcode: H0W8^V7cXK

George Lambert Wilson George was born in Globe, Arizona on January 12, 1943, son of Fred and Mable Wilson. He was the youngest brother of Billee Louise, Fred, and Norman. He enjoyed a carefree childhood, searching for arrowheads and participating... View Obituary & Service Information

The family of George Lambert Wilson created this Life Tributes page to make it easy to share your memories.

George was born in Globe, Arizona on January...