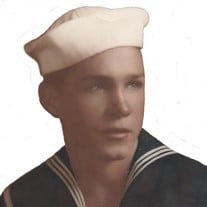 Gerald L Brown, 1924 - 2017 A good friend of the family once asked, "Does Brownie ever say anything?" Such was the contradiction with his eternal spouse and his quiet manner as he conducted himself throughout life. Gerald Brown was the quiet type who just did it right. He was honest in his dealings but by no means a pushover. "Brownie", the name by which most who knew him, got his nickname while serving in the Navy during World War II and the Korean conflict, and was how he was known when he met his wife Dora while stationed in Connecticut. The name stuck and is even what extended family called him. On one occasion, he dropped his son off at his barber to get a haircut. The barber didn't know who Gerald Brown was until they finally figured out the boy was talking about "Brownie". Brownie taught hard work by example and never was one to shy away from a project, be it building an addition onto his house, starting his own business, or assisting those in need when the call came. The only exception to this was his ability to cut hair, Brownie could cut a perfect "bowl cut" without actually using a bowl. When his kids had enough of the teasing at school from his fashion sense he was barred from cutting hair again. Brownie died peacefully at 1:15 pm on Friday, August 18, 2017 at the home of his eldest son Jerry in South Jordan, Utah, where he had lived the past couple years. He was 93 years old. The family gathered, physically and via conference call, the night before as Jerry gave his father a wonderful blessing of release. Brownie suffered from dementia the last several years but hung on strong, presumably wanting to delay the whap in the head by Dora that would be waiting for him on the other side, where she would inevitably ask him what he was thinking. Nevertheless, he is undoubtedly having a wonderful reunion with his wife of 69 years, his daughter Patti and all his siblings that have preceded him in passing. We celebrate the freedom, joy and reunions that had been awaiting him, which he is now experiencing. Brownie is survived by five of his children, Elaine, Jerry, Alan, David and Joe and their spouses, along with 24 grandchildren and their spouses, 49 great-grandchildren (and counting), and his younger sister Gwen. He was born on January 14, 1924 in Gilbert, Arizona, served his country for several years in the Navy and met his beautiful bride Dora in Connecticut where they made their home for over 50 years and raised their six children. During his life, he served in many leadership capacities in The Church of Jesus Christ of Latter Day Saints, he and Dora served in the Washington Temple, and they remained faithful until the end. Brownie’s body has been laid to rest next to Dora in Lakeview cemetery in Bridgeport, Connecticut. Memorial services are scheduled on Sunday September 10, 2017 at 5:00 pm at 11473 S Chapel View Dr, South Jordan, UT and Thursday September 21, 2017 at 5:00 pm at 30 Bonnie View Dr, Trumbull, CT.

Gerald L Brown, 1924 - 2017 A good friend of the family once asked, "Does Brownie ever say anything?" Such was the contradiction with his eternal spouse and his quiet manner as he conducted himself throughout life. Gerald Brown was the quiet... View Obituary & Service Information

The family of Gerald L Brown created this Life Tributes page to make it easy to share your memories.

A good friend of the family once...