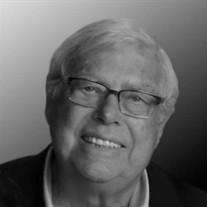 Gerald Eugene DeMond, age 79, passed peacefully away on December 27, 2015 after enduring a long and difficult battle with multiple health issues. Jerry, as he was known throughout his life, was born in Boise, Idaho on October 24, 1936, the oldest son of Eugene Angus DeMond and Bernice Elizabeth Gehle. He had one brother, Loren. Growing up in Boise, Jerry loved camping, hunting, and fishing and spent many days pursuing those interests with his extended family and close friends. He also enjoyed a very close relationship with his grandparents which resulted in fond memories of his many visits and overnight stays at their respective farms. After graduating from Boise High school in 1955, Jerry went with his best friend Will Talbot to Utah State University in Logan, Utah, where Will’s father promptly enrolled him in an LDS Institute class. At the end of his first quarter of school, Jerry was baptized a member of the Church of Jesus Christ of Latter-Day Saints on December 19, 1955 and confirmed January 1, 1956. Jerry took leave from his studies in September 1957 and served a two year mission in the Central Atlantic States Mission which encompassed Virginia and North Carolina at the time. Upon completing his mission, Jerry returned to Utah StateUniversity graduating with a Bachelor of Science Degree with a Biology Minor. While there, he had the rare honor of being elected president of the Pi Kappa Alpha Fraternity for two consecutive years. He also met, courted, and married the love of his life, Janet Poppleton. They were married and sealed in the Logan Temple August 11, 1961. After graduation, Jerry and Janet moved to Long Beach, California where Jerry began a career teaching high school in the Gardena and Anaheim school districts. During his tenure, he earned a Certification of Appreciation for his dedication to the teaching profession. It was during their time in California that Janet and Jerry welcomed the birth of their first son, David. In 1968, Jerry and his young family returned to Utah where he began a new career with the family owned business, Poppleton Beauty Supply. In 1970, Jerry and Janet purchased a home in Pleasant View, Utah, shortly before the birth of their daughter, Stacy. Four years later, a son Bryan was born, followed two years later by their last son, Bradley. In 1980, Jerry left Poppleton Beauty Supply and opened his own business, DeMond Beauty Supply, in Salt lake City. In 1987, Jerry sold his business and returned to his first love - teaching. For the next 20 years Jerry taught AP Biology, Environmental Science, and International Baccalaureate classes at Hillcrest High School in Salt Lake City. Jerry’s unique style, love of science and nature, and ultimately his concern for his students garnered him numerous teaching honors and the universal praise and esteem of his peers and students. He received an Outstanding Teacher Award for academic excellence in science in 1994-1995. After retirement Jerry and Janet traveled often to the East Coast to visit their son David, and participated in a BYU Teaching Abroad Program where they taught English to university students in Guangzhou, China, northwest of Hong Kong on the Pearl River. As an adult, Jerry was an avid reader and built a personal library of hundreds of books. He was an excellent cook, loved working in his yard and large vegetable gardens and enjoyed painting, and traveling. He developed a life-long passion for genealogy and writing the histories and stories of many hundreds of ancestors he discovered through his research. Throughout his life, Jerry possessed a kind, gentle, demeanor and was known for his witty humor and willingness to help others. In a manner he perhaps never fully realized, he had a special capacity to be a positive influence on many who crossed his path. Being deeply devoted to his wife and family, he loved spending quality time with them and was a wonderful grandfather to his grandchildren. During the difficult months of his hospitalization, Jerry won the hearts and admiration of family, friends and the many medical staffs that attended him as he endured it all with remarkable poise and quiet dignity. With his passing, Jerry, leaves behind many fond memories and a proud legacy for Janet and their four children and eight grandchildren: David - Chicago, Il., Stacy (Ron) Nielson and their children Zachary (17), Audrey (15), Carter (9), - Salt Lake City; Bryan (Courtney) and their daughter Brynlie (1) - Salt Lake City; Brad (Kacey) and their children Ellie (10), Joshua (8), Sophie (6), and Luke (2) - Morgan, Ut. He is also survived by his brother Loren (Judy) - Boise, Id. Funeral Services will be 11:00 am, Saturday, January 2, 2016, at the LDS Pleasant View church, 900 W. Pleasant View Dr. Pleasant View, Utah with a viewing starting at 9:30 AM. Interment at the Wellsville City Cemetery.

Gerald Eugene DeMond, age 79, passed peacefully away on December 27, 2015 after enduring a long and difficult battle with multiple health issues. Jerry, as he was known throughout his life, was born in Boise, Idaho on October 24, 1936, the... View Obituary & Service Information

The family of Gerald "Jerry" Eugene DeMond created this Life Tributes page to make it easy to share your memories.