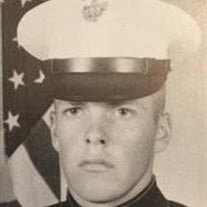 A proud veteran of the U.S.M.C., Scotty gave his final salute on Saturday, September 5, 2015 at his home due to health related complications. He was born on November 7th, 1963, son of Gerald Spencer Farrimond, Merolyn Tena Spafford, and Georgia Farrimond. As trained warrior Marine for our nation ready to give his life if called upon, and an accomplished marathon runner representing the CORPS as he carried its flag, Scotty was proud to be a Marine, and wore it on his left arm. Scotty was a gifted and talented man. He was an avid dog lover, partial to Pit Bulls. If it had four paws, it was protected by this gentle man. From birth, he was a Dallas Cowboys fan. You would always know where he was on Sunday or Monday nights when the BOYS were playing. He was an avid NASCAR fan and loved the thunder of the speedway. His twinkly blue eyes, his booming contagious laugh & big heart will be missed by many. Scotty is survived by his mother Merolyn Tena Spafford, step mother Georgia Farrimond, sister Tresha Lee (Mark) Maxon, brother Trent Lee (Teresa) Spafford, brother Christian Farrimond, and 10 nephews and nieces: Nicholas Booth, Nicole Booth, Destiny Maxon, Beau Maxon, Skyler Maxon, Spencer Maxon, Autumn Spafford, Moses Niumatalolo, Adisyn Spafford, and Malia Niumatalolo. He is preceded in death by his sister Tena Michelle Booth and his father Gerald Spencer Farrimond. Since his passing we have all been amazed at the outpouring of love, and the many stories of support from his family and many kind friends. Memorial Services will be at 2:00 p.m. on Friday, September 25, 2015 at the First Baptist Church of Salt Lake City in the Skaggs Memorial Chapel, 777 South 1300 East, SLC, UT 84102. Scotty’s favorite quote, ENJOY: "Our deepest fear is not that we are inadequate. Our deepest fear is that we are powerful beyond measure. It is our light, not our darkness that most frightens us. We ask ourselves, 'Who am I to be brilliant, gorgeous, talented, fabulous?' Actually, who are you not to be? You are a child of God. Your playing small does not serve the world. There is nothing enlightened about shrinking so that other people won't feel insecure around you. We are all meant to shine, as children do. We were born to make manifest the glory of God that is within us. It's not just in some of us; it's in everyone. And as we let our own light shine, we unconsciously give other people permission to do the same. As we are liberated from our own fear, our presence automatically liberates others." May we all so live... See you on the other side

A proud veteran of the U.S.M.C., Scotty gave his final salute on Saturday, September 5, 2015 at his home due to health related complications. He was born on November 7th, 1963, son of Gerald Spencer Farrimond, Merolyn Tena Spafford, and Georgia... View Obituary & Service Information

The family of Gerald Scott Farrimond created this Life Tributes page to make it easy to share your memories.

A proud veteran of the U.S.M.C., Scotty gave his final salute...