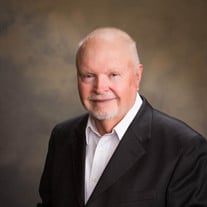 Gerald “Jerry” Joe Lallatin 1940 - 2017 Gerald “Jerry” Joe Lallatin, 77, died November 14, 2017. He says, “It’s never too late to do something with your life.” He was a slow starter graduating from college at 25, getting his MBA at 40, and his law degree at 51. Not being superior at anything, he tried many things. Jerry was born in Soda Springs, Idaho, the oldest of four children of Joseph Charles and Donna Marie Palmer Lallatin. They lived in Oregon, Utah, and Wyoming. At 18 he joined the U. S. Navy, where he served four years. He served in the Atlantic and Caribbean and at naval bases in California and Washington. In 1962 he married Sharyle Stene and they had five children. They were later divorced. In 1980 he married Diana Hunter and they had one child. He was a CPA with Ernst & Ernst in Salt Lake City and Senior VP and CFO of Idaho Bank & Trust in Pocatello and Boise. As a lawyer, he practiced business law and estate planning in Utah until his death. He enjoyed estate planning, because he could help people have peace about their loved ones’ future and it helped people. For over 10 years he was a key figure in Savoy Pharmaceuticals, a privately held company. Jerry was an award-winning watercolor artist with a distinct, painterly style. He had a great sense of humor and was a lot of fun. He loved everything about golf, except keeping score. Much to his dismay, he will miss attending the 2018 Master’s Tournament with his sons and the golf season with his buddies. He was a member of the LDS church. His favorite calling was as a High Priest teacher, because he liked to challenge assumptions and get everyone thinking more deeply. He served in a variety of ways including as a Branch President at the MTC in Provo and as a temple worker. He is survived by his wife, Diana, and his children, Andrea (Lanny) DuClos, Sarah Lallatin, W. Matthew (Janet) Lallatin, Nathan (Sofia) Lallatin, Jonathan (Laurie) Lallatin, Joshua Hunter (Lydia) Lallatin, 17 grandchildren, six great-grandchildren, sisters Ann (Danny) Baker and Linda (Billy) Watson, and sister-in-law Carol (Shelley Fawcett) Hunter. He was preceded in death by his parents and his brother, Bruce Charles Lallatin. Many thanks to Maple Creek Hospice for their loving assistance. Art will be on display at his viewing on Friday, November 17 from 6-8 p.m. at the LDS Church at 1122 Grand Avenue in Provo, Utah. The service to celebrate Jerry’s life and legacy will be held on Saturday, November 18 at 11 a.m. at the same location. Following the service he will be interred at Eastlawn Memorial Hills Cemetery in Provo. In lieu of flowers, please bring Mrs. See’s chocolates, nuts and chews.

The family of Gerald "Jerry" Joe Lallatin created this Life Tributes page to make it easy to share your memories.