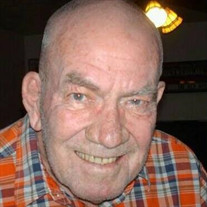 Gerald B. “Jerry” Teeples 1934 - 2017 Gerald B. Teeples passed away peacefully on Tuesday May 24, 2017. He was surrounded by loved ones at the time of his passing. Born on August 8, 1934 to Morris Teeples and Susanna Butikofer, Jerry was the 3rd of 5 children. He was born in Rigby, ID and grew up in Southern Idaho. Jerry entered the military in 1953 and quickly found a career in the Army. Jerry proudly served our country for many years and fought in both the Vietnam and Korean wars where he received several commendations for his service, most notably the Army Commendation Medal. After several years in the Army, Jerry finally retired in 1981 at which time he continued to serve his country as a Federal Marshall, working for many years at Tooele Army Depot and Dugway Proving Grounds before retiring in 1992. Since Jerry could never sit still he worked for many, many years after retirement doing things he loved. Jerry will be remembered for his loving, grumpy attitude. To his friends he was “the grouch” or grumpy Jerry. Nephews and nieces all looked forward to the Grinch showing up at Christmas to steal their gifts. He was always proud of his lawn and spent many hours meticulously caring for it. He was also proud of his Christmas display as he spent hours every December decorating the house. Even when sitting still Jerry had to do something. Many people were blessed with the gift of an afghan that Jerry crocheted for them. He loved making things and working with his hands. Jerry was also a proud member of the Benevolent and Protective Order of Elks and worked tirelessly with them to help with the many charities they supported. He was baptized into the Catholic Church on May 21, 2016 and felt comfort and peace in attending mass frequently. Jerry was preceded in death by his parents, his siblings: DeNiece McCulloch, Elred “Kenny” Teeples, Daryl Teeples, and son, Clay Teeples. He is survived by his wife, Tinamarie; his sister Karen Walker-Sommerfeldt (Will); his children: Gerald Scott Teeples (Cindy), Teri Teeples Delacruz (Jerry), Amenthist Gibbs (Jory), and Justin Lopez (Jason) along with 11 grandchildren and 15 great-grandchildren. Jerry was a resident of Mervyn Sharp Bennion Central Utah Veterans Home in Payson where he could receive full time care. The family wishes to give thanks to the staff in the Veterans home. They became family to Jerry and Tina during his time there and dedicated themselves to him. The love they gave to him made his last days comfortable. In lieu of flowers, donations can be made to the Mervyn Sharp Bennion Central Utah Veterans Home in Jerry’s name. Funeral Services will be held at St. Francis of Assisi Catholic Church 65 East 500 North Orem, UT 84057. A viewing will be held from 10:00-11:00 AM. A rosary for the repose of his soul will be said at 11:00 AM and the funeral mass will be held at 11:30 AM. A luncheon will be held afterwards at the Provo Elks Lodge 1000 South University Ave. Provo, UT 84601.

The family of Gerald "Jerry" Teeples created this Life Tributes page to make it easy to share your memories.