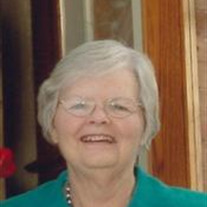 Geraldine “Gerrie” Purdie Fehr returned to her Heavenly Father and the loving embrace of her eternal companion, Gary on Sept. 10, 2013 due to age-related illness. She was born in Odgen, Utah on June 29, 1939 to Bruce James and Mary Dodds Purdie. She moved to San Francisco when she was 3 and lived there until she married the love of her life, Gary Earl Fehr on Oct. 27, 1959 in the Los Angeles Temple. They moved to Utah and eventually settled in their home in Midvale where Gerrie lived for over 50 years. Gerrie was an active member of the LDS Church and served in many callings during her life. She worked for the FBI and as a supervisor for Snelgrove’s Ice Cream for many years. Her family and her love for her Heavenly Father were of utmost importance to her. Gerrie’s life was dictated by generosity, service, kindness, and love. Those who were touched by her life cannot deny what a sweet and loving woman she was, and her influence lives on in the lives of those who knew and loved her. She loved movies, music, dancing, and traveling. She is survived by her 4 children, Karen Rivera (Richard), Keith (Natalee), Steven (Isaias Urrabazo), and Shelly Glad (Todd); brother, Bruce Purdie; and 10 grandchildren and 1 great-grandchild. Preceded in death by her husband; mother and father; stepfather, Ralph Prather; and brother, John Purdie. A viewing will be held at the Midvale East 4th Ward at 87 E. 7100 S. in Midvale on Friday, September 13 from 6:00pm-8:00pm. Funeral services will be at the same location on Saturday, September 14 at 11:00 am with a viewing 1 hour prior to the service. Burial will follow immediately at Wasatch Lawn Cemetery at 3401 S. Highland Dr. in Salt Lake City. Special thanks to the staff of Alta Ridge, St. Mark’s Hospital, and CNS for the love and care they provided to Mom in her final months.

Geraldine &#8220;Gerrie&#8221; Purdie Fehr returned to her Heavenly Father and the loving embrace of her eternal companion, Gary on Sept. 10, 2013 due to age-related illness. She was born in Odgen, Utah on June 29, 1939 to Bruce James... View Obituary & Service Information

The family of Geraldine Purdie Fehr created this Life Tributes page to make it easy to share your memories.