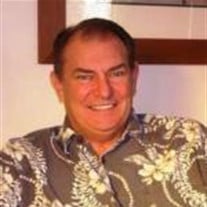 Gerard Henry Anderson died on January 9, 2011 at his home in Sandy, UT at the age of 63. Gerard was born to Henry Talmage and Odette Anderson in Glendale, CA. on January 24, 1947. His lifelong love of sailing began while living in Seal Beach, California where he taught himself to sail at the age of 12. He graduated from Huntington Beach High School in 1965 and was a talented basketball player. After high school, he attended BYU and served an LDS mission in England. After his mission he graduated from BYU with a degree in marketing. In 1970, Gerard married Patty Duvall and their lovely daughter, Trina was born. Then in 1974 he married Llana Holbrook and raised her daughter Dana as his own. Gerard’s career was in medical sales, contact lens, cataract implants and intraocular lenses. He was the consummate salesman and gentleman. Gerard’s irrepressible spirit led him to move to Hawaii in 1985. While living in Kona, he earned his Sea Captain’s credentials and owned a catamaran touring business. He loved the beauty of Hawaii, the people he met and being on the water sailing and surfing. In 1988 he returned to Utah and medical sales in surgical eye equipment. In 2005 He met and fell in love with Dee Ann Keller. They were married in 2007. Their life together was filled with laughter and love. Gerard had a spirited ability to explore life beyond its boundaries, while maintaining a sense of humility. His amazing athletic ability provided him thrills and adventures in sailing, skiing, surfing, motorcycles, biking, camping, tennis, golf, basketball and Porsche race car driving. He so dearly loved his friends. His friends are legions in number, lifetime and new, he was loyal to all of them. He is survived by his wife, Dee Ann, mother Odette Anderson, brothers Steven, Paul, Eric, sister, Suzanne, his daughters Trina and Dana, eight grandchildren, beloved nephews, nieces and cousins, his stepchildren, Al, Tracey and Joshua and of course, his dogs Sophie and Louie. He is preceded in death by his father and granddaughter, Faith. Our grief at your passing will be with time, tempered by joy, each time your memory is recalled by us. You lived life with zest, kindness, dignity, joy and love. Your love will go on in our hearts forever. Church services will be held on January 29, 2011 at 11:00 a.m. at the LDS Granite View Ward, 2675 E Mt Jordan Road (9700 S) Sandy, UT A celebration honoring Gerard’s life will be held on January 30, 2011 at 2:00 p.m. at Monte Luca Clubhouse 8384 S. Via Riviera Way (3195 E) Salt Lake City, UT.

Gerard Henry Anderson died on January 9, 2011 at his home in Sandy, UT at the age of 63. Gerard was born to Henry Talmage and Odette Anderson in Glendale, CA. on January 24, 1947. His lifelong love of sailing began while living in Seal Beach,... View Obituary & Service Information

The family of Gerard H Anderson created this Life Tributes page to make it easy to share your memories.