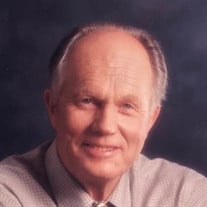 Obituary for Gilbert W. Jensen February 9, 1932—September 5, 2019 Gilbert W. Jensen, age 87, was born on February 9, 1932 in Salt Lake City, Utah to his parents Dean L Jensen and Lucille Nowell Jensen. His grandparents were Willard Jensen and Caroline Petersen. Early grade school years were in Salt Lake. In the 1940’s, Gil’s father, Dean took over the IHC Farm Implement dealership in Preston, Idaho and Gil attended the balance of his grade school years there, where he met his High School sweetheart, Myrna Merrill, at Preston High. He spent 3 years at the University of Idaho in Moscow. Gil & Myrna were married in 1952 in the Salt Lake Temple. They moved to Logan, Utah to finish Gil’s last year of college at Utah State University in 1954. The couple later moved to Salt Lake for employment. Children soon arrived, Terry in ‘53, Creg in ’56, Jenny in ’58, Jo in ‘61 and Clair in ‘64. Gil was employed by Graybar Electric, then Sperry Utah, Co. and in 1964 was invited to work with his father for the Doyle/Jensen family ski business at Brighton. In later years Gil served a term as President of the Utah Ski Association in it’s formative years. He was also past President of the Intermountain Ski Areas Association and became part owner of Brighton. Myrna and all of the Jensen kids had experience working at Brighton during those years. In 1986, Brighton was sold to the Big Sky Montana Ski Corp. Gil & Myrna built a log home in Island Park, Idaho in 1987, where they enjoyed their later years with family and friends. They found and carried many logs that Gil used to build the furniture for the cabin. They had more time for fishing and hobbies, as well as enjoying their Salt Lake home with its large yard full of fruit trees, vegetables and flowers which he generously shared with friends and neighbors. Both Gil & Myrna were active members in their LDS East Millcreek 12th Ward, filling many callings over the years. Gil’s most memorable being Scoutmaster, teaching the young men to love and respect nature. Though he was repaid with frogs in his sleeping bag, he enjoyed the many camping trips and was genuinely pleased to have the scouts come to the house to advance and pass off merit badges. Gil was a master craftsman in many areas. He created a magical backyard with many stones he carefully selected and placed for rock walls, flower beds, stairways and play areas, always dreaming of the day when a wedding would be held there. He designed and put together the swing set and climbing bars and even the sand box was lined with stones he cut to fit. A water wheel in the back corner and fire pit where he would cook dutch oven dinners, to the delight of all, stand as testament to his creativity and industrious labors. His abilities in stained glass were limitless as was his imagination. He carefully worked to perfect the art of carving ducks, making each feather and detail appear as though it were the real thing. He moved on to larger birds of prey, rainbow trout and other fish and tiny delicate hummingbirds, 3 of which he finished just weeks before his passing. He kept Myrna’s memory alive by performing acts of service and providing many meals to friends and neighbors, helping with handyman projects and sending out greeting cards. The talents he developed and shared with all will be a continuing legacy and inspiration for generations to come. Gil was preceded in death by his parents, his dear Myrna and is survived by his children, Terry Lone, Creg Jensen, Jenny Eldredge, Jo (Dave) Carlson, Clair (Robin) Jensen, nephew Thom (Debbie) Lower, eight grandchildren; Rory, Gillian, Jared, Joshua, Jacob, Dayl, Amanda, Lindsey and seven great-grandchildren, Samuel, Zeke, Ezra, Sebastian, Leo, Daisy and Mason. Viewing will be on Friday, September 13, 2019 from 4:00 to 7:00 p.m. at the LDS Church located at 2702 Evergreen Ave SLC, UT. A Grave side Services will be held on Saturday, September 14, 2010 at 11:00 a.m. at Wasatch Lawn Memorial Park located at 3401 S. Highland r., SLC, UT 84106. The family gratefully requests that in lieu of flowers, donations be sent to the LDS humanitarian fund.

The family of Gilbert W Jensen created this Life Tributes page to make it easy to share your memories.