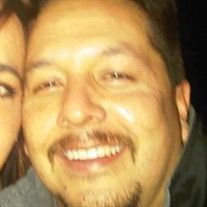 Gilbert L. Martinez "Bobo” Born January 28,1972 to Gilbert V. Martinez and Lorraine Louise Martinez in Ogden UT, lived in Roy the last 18 years. Died suddenly Sunday 04/07/2019. Gilbert lived most of his childhood in Ogden, attending Jefferson Elementary, Highland Middle School and graduating from Ben Lomond High School. Bobo loved all things sports or competition in general. His baseball career started with his beloved Mighty Mites and ended with his softball team of family and friends “Whassup” with lots of baseball in between. He loved football, poker, golf, fishing, basketball and though he never officially was a debate champion, he sure loved a good one. His biggest love was for the Dallas Cowboys. He had a special song he sang every season, until finally he might have been convinced it was more of a jinx. Bobo was a great friend; he had a way of making the person standing in front of him feel like they were the most important person in the room. He played hard, he worked hard but most of all he loved hard. His smile was always genuine and sincere. His family was his life, and although the last few years he didn’t get out much, he could pick up a conversation with someone like a day hadn’t gone by. Bobo’s greatest accomplishments were his 3 sons, Jacob, Jesse and Jedidiah, and when he finally got the girls he always wanted through grandchildren - Starr, Arianna and Riley. The 30 years of love with Jody Romero, although they were never officially married, the relationship weathered many storms but was stronger than ever at the time of his passing. He is survived by his spouse Jody Romero, 3 sons Jacob Martinez, Jesse Martinez and Jedidiah Martinez (Kayli), his Grandmother Adelia Martinez, his granddaughters Starr, Arianna, and Riley, grandson Dominic, his father Gilbert, his sisters, Valerie Martinez, Jessica Romero Stark (Casey), Trisha Martinez, Monica Morales, Felicia Martinez, Tiffany Casco and brother Mike Romero (Bri). Nephews Preston McCubbin, Ryan Vega, Austin McCubbin, Ricki Stark, Stanley Stark, baby Casey Stark, Chris Stark and Reggie Stark. Nieces Alyssa Stark and Ella Romero. Many many many many MANY Aunts, Uncles and cousins whom he loved with all of his heart, but there isn’t enough room to post all of the names. He was preceded in death by his Grandma Juanita Martinez, Grandpa Isaac Martinez, Grandpa Jacob Martinez, Uncle Ray Martinez, Uncle Joe Martinez, Aunt and Nina Orpha Martinez, Aunt Merleyne Valdez, Step father Pep Villarruel and last but not least his beautiful loving mother Lorraine Villarruel. A small informal gathering to pay your last respects to Bobo will be held at Premier Funeral home, Thursday, April 11th, 6-8 pm, 5335 So 1950 W Roy, UT. There will be a celebration of Bobo’s life held on Saturday 4/13/19 @ 3 pm at the Marshall White Center in Ogden. Come share your memories or just come to celebrate Bobo.

The family of Gilbert L. "Bobo" Martinez created this Life Tributes page to make it easy to share your memories.