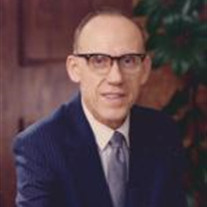 Glen Alden Roper (84) passed peacefully from mortality, surrounded by his family, on December 6, 2010. Born June 2, 1926 in Eureka Utah to Wesley D Roper and Vivian B. Bray. Graduated from Payson High School in 1944 and served honorably in the Navy during World War II. He then served a mission for the Church of Jesus Christ of Latter-day Saints in California. He married Delores Greenhalgh in the Manti Temple on June 2, 1948, celebrating 61 years of marriage this year. Worked for Eastman Kodak for 30 years, the last 10 years in Rochester, NY as an instructor servicing copiers and equipment. He was a faithful member in the LDS church, serving as a Stake Sunday School Presidency and Ward Executive Secretary for 6 Bishops. Served 12 years as a temple worker in the Washington DC, Provo, and Jordon River Temples. Served a mission with Delores in the Wisconsin Milwaukee Mission from 1988 to 1989. He enjoyed hunting, fishing and camping with his brothers and family. His hobbies included model trains, building and flying model airplanes and later ham radio. The greatest loves in his life was his wife and family and their successes. Survived by his wife Delores, his children: Larry, Mel (Lori), RuthAnn, and Kayleen, siblings Duane (Barbara), David (Barbara) and Afton Bowen. He leaves behind 10 grandchildren and 20 great grandchildren. Proceeded in death by his parents and sister Donna Robbins. Funeral services will be 11:00 am, Saturday, December 11, 2010 at the Granger North Stake Center, 3173 South 3450 West, West Valley City, Utah with a viewing from 6 to 8 pm, Friday, December 10, 2010 at the church and Saturday prior to services from 9:45 to 10:45 am. Interment will be 3:00 pm at the Santaquin City Cemetery. Special heartfelt thanks to the staff at Harmony Hospice for their kind and gentle service during his final days. Dad … we will “See you in the morning”.

Glen Alden Roper (84) passed peacefully from mortality, surrounded by his family, on December 6, 2010. Born June 2, 1926 in Eureka Utah to Wesley D Roper and Vivian B. Bray. Graduated from Payson High School in 1944 and served honorably in... View Obituary & Service Information

The family of Glen Alden Roper created this Life Tributes page to make it easy to share your memories.