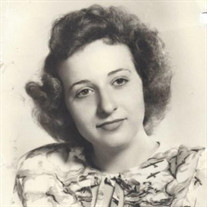 Glena May Jesperson Glena May Jesperson Wright was born in Binghampton, (Tucson) Arizona, on December 17, 1927 to James Andrew Jesperson and Flora May Williams Jesperson. She was the eighth of nine children. The family had moved there after being chased out of the Mormon colonies in Mexico by Pancho Villa and his band. Since there was only one boy so far in the family and hoping for another, her siblings called her Sonny Boy until she was old enough to insist she was a girl. Her father was a farmer and a carpenter, and she always considered herself as a farm girl. At eight years old she was baptized a member of the Church of Jesus Christ of Latter-Day Saints in a deep-water tank next to the church in Binghampton. Due to her mother’s poor health, the family soon moved to San Diego for the cooler climate. They eventually settled on a farm in San Diego’s Mission Valley. She spent her youth picking tomatoes, topping onions, raising chickens, and occasionally losing in a rotten tomato fight with her younger brother, Lynn. She had a job at a laundry after school, which was where, she said, "I learned to fold bed sheets and blankets the right way". After graduation she got a job at North Island as a file clerk in a military office. It was a long way to work. She had to ride the streetcar to the foot of Broadway and then catch the ferry boat to the island. The language of the men was so crude and scary to her; she was not used to that kind of language. So, she got a job working at the hospital in the supply room. She later had jobs at Walkers department store and later as a waitress. Getting bored, she decided to attend Brigham Young University in Provo, Utah. She soon learned that college was harder than high school but, more importantly, BYU was lean on boys because all the healthy ones were being drafted into the military. She plugged away, and at the end of the semester she went home for Christmas. When she got home, she was pleased to learn that her sister Thora and Thora’s husband had been called to oversee and run the Church’s servicemen's home in downtown San Diego. It was a very large home which provided a place where all the boys were living when they were off duty from the Navy ships and the Army or Marine camps. Her sister quite often wanted Glena to babysit her kids there. One night after a fireside at the servicemen's home, a lot of the kids were standing in a circle talking. She was standing next to Eddie but had never been introduced to him when a lady said, “Congratulations, Glena. I hear you are engaged to be married." Eddie said, as he put his arm around her, "Oh yes we are, but we haven’t set a date yet." After the lady walked away, Eddie said to Glena, "Well, if we are going to be married, I ought to be able to get a date with you." That was the beginning of their romance. Glena continued to date other boys and received several marriage proposals, but from that day on Eddie chased her until Glena caught him. They were married in the Manti, Utah Temple in October 1948. Their reception was held at the Servicemen’s home. However, when she left the receiving line to get a drink, a few of Eddie’s friends kidnapped her, drove her downtown and dropped her off at Horton’s Plaza. It took Eddie a while to find her, so they ended up without any pictures. Glena said it was the first time she ever saw Eddie really angry. For their honeymoon Eddie, or Ted as he was known in his hometown, took her deer hunting. How romantic! But she didn’t complain as long as she was with him. Their first child, Scott, was born in October 1950, and fifteen months later along came Gregg. Then Kellee, Janelle and Tim joined the family. Over the next twenty plus years as a devoted member of her Church she served in many leadership and other callings. Her home became a gathering place. Many nieces and nephews, as well as Indian placement and other needful youth have lived in her home. Eddie and Glena’s children began to leave home and serve missions - Scott to Pennsylvania, Gregg to Mexico, Kellee to Oklahoma and Tim to South Korea. Eddie and Glena received their own call to serve in the Frankfurt Germany mission in 1989 for 18 months. On their return they decided to move to Utah and the gathering began. Now all the children are in Utah - Scott Wright (Pam), Springville, Gregg Wright (Jan), Orem, Kellee Gordon (Keith), Midway, Janelle Stopa, Orem, Tim Wright (Wendy), Orem. She is also survived by 24 grandchildren and 39 great grandchildren. She wore out her life in the service to God and her family, as well as to friends, neighbors, and anyone in need. She was a woman of great Faith and will be dearly missed.

Glena May Jesperson Glena May Jesperson Wright was born in Binghampton, (Tucson) Arizona, on December 17, 1927 to James Andrew Jesperson and Flora May Williams Jesperson. She was the eighth of nine children. The family had moved there after... View Obituary & Service Information

The family of Glena May Jesperson Wright created this Life Tributes page to make it easy to share your memories.

Glena May Jesperson Wright was born in...