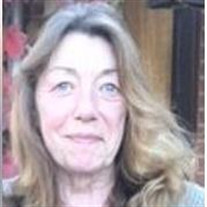 Glenda Carol Stevens Willes, born October 7, 1947, left us on February 4, 2016 at her son's home in Lehi. She was born in Springfield, Missouri, the older of twin girls. Glenda's childhood was spent in a much loved southern Missouri and then Kansas for elementary school. Glenda's family moved to Salt Lake City in the 60's. She graduated from West High School, attended USU, and always sought some class through-out her life...including belly dancing. Glenda was an avid reader and always had the title for your next good read. She thoughtfully selected books as gifts and you could be confident of it being a page turner...she nearly always read the book before she gave it to you. While living in Boise Glenda was a librarian, a favorite time in her life. Glenda was preceded in death by her father, William Stevens. Glenda is survived by her daughter, Camie Wewer (Bob), son, Jason Willes; three grandchildren, Megan, Kayla, and Dillon; great-grandson, Tommy; her mother, Virginia Stevens; three sisters, Sharon Adamson (Jerry), Linda Hoilund (Stuart), and Becky Raso (Lawrence). She was a favorite aunt of Tawnie, Wade, Jami, Amy, Brandon, and Nate! In addition, Glenda attended to her lifelong friendships with Sandy Suttle, Janet Blain, Cookie and Jim Vealy. Glenda considered Evergreen, Colorado her home and she loved her friends and life there. She served her community for over 20 years as head of hospitality at the Evergreen Elks Lodge. The American Legion's mission of honoring our veterans was important to Glenda. She volunteered for fund raisers, placing flags on veterans' graves, and distributing poppies. She was tireless in this effort for over 20 years. Losing Glenda is such a heartache for her family, but, for her, it means freedom, home, and an abiding love.

Glenda Carol Stevens Willes, born October 7, 1947, left us on February 4, 2016 at her son's home in Lehi. She was born in Springfield, Missouri, the older of twin girls. Glenda's childhood was spent in a much loved southern Missouri and... View Obituary & Service Information

The family of Glenda Carol Stevens Willes created this Life Tributes page to make it easy to share your memories.