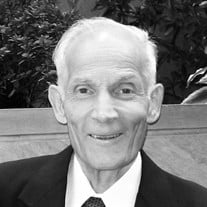 Glenn Edward Mott passed away peacefully on June 4th during his sleep with Colleen, his bride of nearly 65 years, lying by his side holding his hand. Glenn was born in Spokane, Washington to Robert Galen Mott and Mary Cecilia Schopf on May 25, 1932. He was the only boy in his family, having 1 older sister and 3 younger sisters, 2 of whom were twins born on his 9th birthday. He learned the value of hard work early in life and passed this trait on to each of his 10 children. Both Glenn and Colleen graduated from Central Valley High School in Veradale, Washington and they married in 1951. They were sealed in the Salt Lake City Temple 1 year later. They made the Spokane Valley their home for the next 30+ years, where Glenn owned and operated Mott Electric Company, a commercial and industrial electrical contracting firm started by his father. All 10 children worked at various times during their youth at the "shop", cleaning equipment, hauling materials, taking inventory, or just riding along in one of the trucks. After closing his contracting business, he became a job superintendent and estimator for Electric Smith in Spokane. He continued in this position for the next 10+ years until he moved his family to Lindon, Utah in 1985 to open and manage the Frontier Pies restaurants. Glenn was handpicked for this job by the owner from Spokane because of his work ethic and his commitment to doing things "by the book". Glenn joined the Church of Jesus Christ of Latter-day Saints while attending the University of Washington, and grasped the iron rod immediately and firmly from that point on. He served faithfully in many church callings throughout his life, including Priesthood Quorum positions, Stake Missionary, Stake Young Men's President, Bishop's Counselor, Bishop, and High Councilor. He was a faithful and diligent home teacher and an ordinance worker in the Mount Timpanogos Utah Temple. Upon retiring from Frontier Pies in 1994, he and Colleen served two LDS church missions, the first in Raleigh, North Carolina, and the second in Fresno, California. All who knew him will remember him as a man of utmost integrity, humility, and sincerity. He was also a bit of a tease, with an ability to pull surprising pranks on people that made everybody laugh. He was affectionately called "The Chief" by those who knew him best. In the days before his passing, he expressed his love for the Savior, his sweetheart Colleen, and all of his family. During the last few days of his life, he was still dispensing fatherly advice and counsel to family members who were able to visit, exhorting all to love each other, to be happy, to take care of each other, and to continue to do one’s duty. This included a great granddaughter and her fiancé who will be sealed on Saturday, just 1 week to the day from his passing. His example and guidance will be cherished forever. Glenn was preceded in death by his parents, his younger sister Carolyn, 2 grandchildren, Adam Mott, and Scotty Ford, and 2 great grandchildren, twins Emily and Malia Tanner. He is survived by his 3 loving sisters, Joye Lucas (Brad), Jean Servizi (Jim) and Marilyn Brenchley. His legacy lives on through his children, Terry (Lisa Demoney), Darcy (Jo Hudson), Greg (Marlene Sampson), Denise, Joe (Ellen Sampson), Cindy Alldredge (Jody), Aaron (Teresa Miller), Lisa Ford (Derin), Judy Simon (Brad), and Jon (Kim Southam), 48 grandchildren in order of birth: Mysha, Jann, Tara, Jill, Jake, Jared, Daniel, Mandy, Corrinne, Jeff, Gretchen, Seth, Isaac, Eric, Kelly, Brooke, Anthony, Mitch, Arianne, Nicolas, Joanna, Megan, Parker, Zack, Curt, Audra, Luke, Paige, Rebecca, Jessica, Taylor, Steven, Jackson, Mikey, Jackson, Kylie, Alex, Haylee, Sadie, Brian, Bailey, Vallerie, Abbey, Andy, Stephanie, Carson, Emilie, Tiffany, and 105 great grandchildren (so far!). A viewing will be held on Wednesday night, June 8th, from 6:00 pm until 8:00 pm and again on Thursday, June 9th, from 9:30 am until 10:30 am at the LDS chapel at 3200 North 650 East, Lehi, Utah. A funeral service at the same location will be held immediately following at 11:00 am. Glenn will be laid to rest following the funeral services in the Lehi City Cemetery.

Glenn Edward Mott passed away peacefully on June 4th during his sleep with Colleen, his bride of nearly 65 years, lying by his side holding his hand. Glenn was born in Spokane, Washington to Robert Galen Mott and Mary Cecilia Schopf on May 25,... View Obituary & Service Information

The family of Glenn Edward Mott created this Life Tributes page to make it easy to share your memories.

Glenn Edward Mott passed away peacefully on June 4th during his...