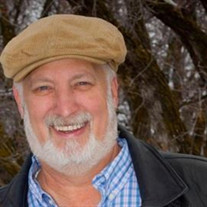 Glenn was born February 27, 1954, to Annie and Keith Roland Tenney in Fort Ord, California. Glenn was the oldest of 3 kids and loved his sisters Diann and Carol very much. One of Glenn’s favorite childhood memories was waiting with his Dad for the Southern California morning fog to lift so they could run down to the ocean and jump the waves. As a kid, Glenn also loved the yearly family camping trips to Sequoia National Park, hiking through the redwoods, and swimming in the ice-cold run-off water with Diann and Carol. Glenn’s enthusiasm for life showed through his huge smile and expressive eyes. As a young man, Glenn served a mission for The Church of Jesus Christ of Latter-day Saints in England. He loved sharing his testimony of Jesus Christ on the streets of Skegness. In 1982, Glenn and his wife Carolyn celebrated the birth of Roland Michael Tenney. Glenn adored being Mike’s dad and made sure he had every Star Wars toy and collectible. Glenn also shared his love for music with his son and loved to watch old home videos of Mike dancing to Michael Jackson songs. Glenn enjoyed living in San Diego, Seattle, and Las Vegas. He was like a father to many of his nieces and nephews who knew if they needed to talk, have a nice dinner, or needed a place to stay the night, “Pops” was only a phone call away. In the summer of 2009, Glenn met Cheryl, and soon the two of them were living life to the fullest together. Swimming in the ocean, movies with a mega tub of popcorn…when they were together, there was lots of fun and laughter! Glenn loved to spend time with family and enjoyed playing cards with the grandkids. Glenn was a jokester. Mike and Sarah’s son Isaac loved to play jokes on Glenn and have Glenn try to get him back. Christmas was especially fun with Glenn. With his beard and Santa hat, many kids mistook him for Santa which he embraced wholeheartedly. Glenn’s life was centered around family and The Church of Jesus Christ of Latter-day Saints. One of Glenn’s favorite callings was as ward chorister where he would put his whole body and soul into the music. In 2016, Glenn and Cheryl were able to serve a mission in Harlowton, Montana. He found great joy in becoming part of the community there. From working at the food bank, volunteering in the schools, helping out on the ranches, Glenn loved Montana, especially the people he met there. Glenn had the ability to make the best of difficult situations. He taught his family and friends the importance of living life to the fullest, taking time to enjoy the good things in life. Glenn will be deeply missed by everyone who knew him and an example to us all. Funeral Services will be held Friday, February 4th, 11:00 am at the Saratoga Springs 1st Ward, 587 South Saratoga Road, Saratoga Springs, with a viewing prior to services from 9:30 – 11:00 am. Interment, Lehi City Cemetery.

Glenn was born February 27, 1954, to Annie and Keith Roland Tenney in Fort Ord, California. Glenn was the oldest of 3 kids and loved his sisters Diann and Carol very much. One of Glenn&#8217;s favorite childhood memories was waiting with his... View Obituary & Service Information

The family of Glenn Roland Tenney created this Life Tributes page to make it easy to share your memories.