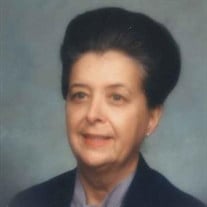 Our beloved mother, grandmother, and great-grandmother, Glynn Crosby Neeley Smith, age 96, passed away Saturday, August 21, 2021, in Ogden, UT. Glynn was born January 25, 1925, in Moselle, MS, to Grady and Vernell Crosby. She graduated from high school in Ellisville, MS, and Draughon’s Business College in Jackson, MS. Glynn worked as a keypunch operator for Masonite Corporation in Laurel, MS. She married Nova Neeley, and they had a son, Robert. Nova unexpectedly died on May 16, 1954. Later, Glynn married Walter Smith, and they raised their combined family in Salt Lake City. She worked in the accounting department for Hi-Land Dairy until she retired. After moving to Ogden, she attended First Baptist Church. She was an accomplished artist and quilter. She handmade hundreds of quilts for the Children’s Justice Center in Ogden to comfort children. Glynn was preceded in death by Nova Neeley, Walter Smith, stepdaughters Donna Smith and Shirley Smith, and her brothers, David Crosby and Bud Crosby. She is survived by her son, Robert; daughter-in-law, Deanna; stepson Larry Smith and his wife, Sybil, of Kanab, UT; grandchildren Adam, Andrew, Cheri, Curtis, Danny, Jen, Karie, Sarah, Sheldon, and Tina, as well as several great-grandchildren. A memorial service will be held Friday, August 27, 2021, at 11:00 a.m. at First Baptist Church, 2519 Jefferson Avenue, Ogden, UT. A viewing will be held at 10:00 a.m., August 27, at First Baptist Church. Interment will be at the Ogden City Cemetery. Arrangements are being administered by Premier Funeral Services. Condolences may be shared at premierfuneral.com. The family would like to thank the staff at Apple Village in Layton, UT; The Gardens in Ogden, UT; as well as Linda Jorgensen, who lovingly cared for Glynn. In addition, the family thanks First Baptist Church. She was the bedrock of our family, and she will be dearly missed. The following is a YouTube link to view Glynn funeral services https://youtu.be/RXvpRGvGZwQ Join Zoom Meeting https://us02web.zoom.us/j/83747050031?pwd=L2pYZjZjK1NFWEw2ZXk2bXEzYUZWQT09

The family of Glynn Crosby Neeley Smith created this Life Tributes page to make it easy to share your memories.