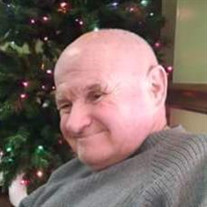 Gordon Glenn Fennema died peacefully on November 8th in Salt Lake City, UT at the age of 78. Gordon was born on August 27, 1939 in Salt Lake City, UT to Harry and Pearl Fennema. Gordon grew up here in Utah, where he married his first love Charlotte Bailey. While the two were only married a short time, they had six beautiful children together. Later on in life, Gordon moved to California where he married Marya, who was a nurse at the care facility he worked at. After a short while, the couple welcomed their only daughter together into the world. Gordon was a jack-of-all-trades, and will always be remembered for his strong spirit, his devotion to his family, and his infectious smile. Gordon is survived by his children Vicky DeLozier, Kassy Ortiz, Shelly Watters, Gary Bailey, Craig Bailey, and Kenneth Bailey. He is also survived by 18 grand-children, and 11 great-grandchildren. He is preceded in death by his parents, Harry and Pearl Fennema, his wife Marya Fennema, his son Jeffrey Fennema, his brother Ronald Fennema, and his first wife Charlotte Bailey. A memorial is scheduled for 11:00 AM on Saturday November 18th at The Church of Jesus Christ of Latter Day Saints located at 5190 South 1050 East, Salt Lake City, UT 84047 with a luncheon to follow. All are welcome to attend and celebrate Gordon's life. The family would also like to thank Gordon’s caregiver’s at Willow Wood Care Center for their countless hours of dedication to his care.

The family of Gordon G Fennema created this Life Tributes page to make it easy to share your memories.