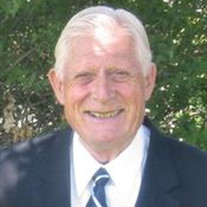 Grant McDonald Wilson 1931 – 2012 Grant McDonald Wilson passed away surrounded by his children at home on September 10, 2012 in Orem, Utah. Grant was born the fourth child (of ten) to Marion Lyman Wilson and Louisa Stevenson McDonald at Colonia Pacheco, Chihuahua, Mexico on May 24, 1931. He moved with his family to Rainier, Oregon in 1944. He graduated from Rainier High and then studied at BYU. Grant married Reta Raphiel on September 18, 1950 in the Logan Temple after meeting at college. Grant and Reta are survived by four children, two brothers, four sisters, 14 grandchildren, and 13 great grandchildren. His children are Wesley Raphiel Wilson (Alane), Lauretta Wilson Tew (Scott), Richard Raphiel Wilson (Mike), and Walter Raphiel Wilson (Amanda). His siblings are Ervin M. Wilson, James J. Wilson, Julie McConkie, Mary W. Miles, Frances Richards, and Amy W. Boe. Grant graduated in 1953 with a BS in Physical Chemistry from BYU and then in 1957 with a PhD degree from MIT. Grant developed a widely used thermodynamic phase equlibria predictive equation known as the Wilson Equation, while at MIT. He worked as a research chemical engineer for several companies and later president of PVT Inc in Houston. He taught and did research at BYU from 1970 to 1978. In 1977 he founded Wiltec Research Company in Provo, Utah. In 2001, Grant was honored as an outstanding alumnus of BYU with an Emeritus Award. Grant and his family lived in California, Pennsylvania and Texas before returning to live in Utah in 1970. Grant was a lifelong devout and active member of The Church of Jesus Christ of Latter-day Saints. He held many callings including branch president, high council member, high priests group leader, teacher, temple worker and Boy Scout leader. In 2002, Grant and Reta served in the India Bangalore Mission for the LDS Church. Grant was known for his quick wit, kind nature and love of hiking in the mountains. His favorite climb was Mt Timpanogos where he summited innumerable times. Funeral services will be 11:00 am, Saturday, September 15, 2012 at the Orem 2nd Ward Chapel, 80 South 280 East, Orem, Utah with a viewing prior to services Saturday from 9:45 to 10:45 am and Friday at the church from 6:00 to 8:00 pm. Interment at the Orem City Cemetery, 1520 North 800 East). Online Condolences at www.premierfuneral.com

The family of Grant McDonald Wilson created this Life Tributes page to make it easy to share your memories.