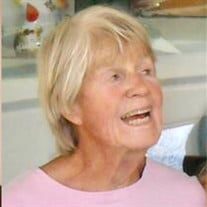 Grethe Jensen, mother, grandmother, athlete and animal lover passed away 13 July 2018 after a long illness. She was born 24 August 1927 in Oslo, Norway and attended school in Oslo. After World War II she served in the Norwegian Army and sailed in the Merchant Marine as a Radio Telegraphist. Aboard ship she met Johan Jensen who she married. They had three children, Truls, Trine and Kari. The family emigrated to the United States and settled in Ventura, California where Grethe graduated from Ventura College in Nursing and worked as a maternity room nurse for many years. She and Johan subsequently divorced and she lived as a very independent single woman for the rest of her life. She loved being physically active with her favorite activities being hiking, tennis, skiing, gardening and swimming. She is fondly remembered at Rancho Ventura for creating and leading their exercise class program that continues to this day. She subsequently moved to Midway, Utah near her daughter Trine and her eldest grandchildren, Erik and Micaela. During this time she traveled extensively, visiting many parts of the world including Nepal and Kenya. She moved to Kanab, Utah for a few years, then moved back to Midway for a time and then moved back to Ventura to be near her other daughter Kari and her younger grandchildren, Johan and Kaja as they grew up. As she grew older and her health deteriorated she moved back to Utah to spend her final years near Trine and her husband Bill and where she met her great granddaughter Mia. She was very much an animal lover, sharing her life with her dogs Chini and Teddy, her cats, Mia and Blazee and many granddogs. She will be greatly missed by all who loved her; Erik and Brittany, Micaela and Mia, Truls and Emma, Kari, Kaja and Johan, Trine and Bill and many other loved ones.

Grethe Jensen, mother, grandmother, athlete and animal lover passed away 13 July 2018 after a long illness. She was born 24 August 1927 in Oslo, Norway and attended school in Oslo. After World War II she served in the Norwegian Army and sailed... View Obituary & Service Information

The family of Grethe Jensen created this Life Tributes page to make it easy to share your memories.