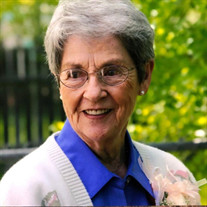 Our mother, grandmother, and sister and friend, Gwen Merrill Reading passed away Saturday, February 19, 2022 from injuries sustained in an automobile accident on that same date. The accident occurred in West Jordan, Utah. She was born May 22, 1922 in Rexburg, Idaho to Leslie Vinton and Marie Rebecca Miller Merrill. After a few years in Rexburg, the family moved to Winder, Idaho then to Preston, Idaho, where Gwen spent the remainder of her growing up years. In her later high school years and in her first year at Utah State Gwen and her two other sisters, Venus and Carmen formed a trio which sang professionally in several venues, including the “Blue Bird” in Logan. They actually recorded some songs prior to their breaking up of the singing trio. All three sisters had a lifetime of music and singing to the joy and benefit of their families. She attended Utah State Agricultural College in Logan, Utah where she met her future husband Roland Gardner Reading. Following Roland’s graduation from Utah State and embarking in active duty in the Army Air Corp Roland and Gwen were married in Las Vegas, NV on May 22, 1942. After World War II, Roland and Gwen and family moved to the San Francisco bay area of Northern California where they lived for about 15 years. While in California four children came into the family; Carolyn, Kenneth, Craig and Richard. The little town of Castro Valley was there home until 1963 when they moved further south to Fremont. Here they purchased a small janitorial and swimming pool supply business. This provided opportunities for the boys to work and learn some business skills. Only after a few years, dad was offered a job in Stockton, California and mom and the family were now relocated to the central valley. While there Gwen was able to find employment with the local school district and worked for 15 years in the administrative office. Gwen sent 3 young men on missions for the Church of Jesus Christ of Latter-day Saints while living in Stockton. After dad retired, Roland and Gwen moved to their dream town on Bend, Oregon where they owned 40 acres of beautiful land NW of Bend. They spent 23 years in Bend prior to the passing of Roland. They have great memories and some wonderful friends there. To be closer to family, Gwen relocated to West Jordan, Utah where she has resided until her passing. Mother loved her family and found great joy in visiting with them and keeping up with their challenges and accomplishments. Mother was a member of the Church of Jesus Christ of Latter-day Saints and served in many callings including many years as a ward chorister in numerous wards. She had a testimony of Jesus Christ and His restored gospel and was faithful in all ways, until the end. Gwen was preceded in death by her husband Roland, son Kenneth (Suzanne); parents: Leslie Vinton and Marie Rebecca Miller, siblings; Vinton(Afton), Venus(Herbert), Carmen(Ralph), Richard, Douglas(Suk). She is survived by her brother Reed Merrill of Logan, Utah; children: Carolyn(Richard)Rigby, ID; Craig(Leslie)Casper, WY; Richard(Marianne)West Jordan; 20 grandchildren, 56 great-grandchildren and 1 great-great grandchild. Funeral Services will be at 11:00 a.m. on Saturday, February 26, 2022 at 8539 South 2200 West, West Jordan, UT. Visitation will be one hour prior to the services.

Our mother, grandmother, and sister and friend, Gwen Merrill Reading passed away Saturday, February 19, 2022 from injuries sustained in an automobile accident on that same date. The accident occurred in West Jordan, Utah. She was born May... View Obituary & Service Information

The family of Gwen Merrill Reading created this Life Tributes page to make it easy to share your memories.

Our mother, grandmother, and sister and friend, Gwen Merrill...