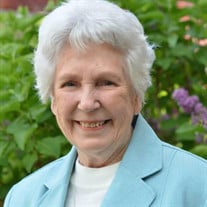 Gwendolyn May Helfrecht Luke May 15, 1924 – November 29, 2020 Gwen H. Luke, age 96, passed away on November 29, 2020, incident to advanced age and the effects of Alzheimer’s / dementia, in South Jordan, Utah. Gwen was born May 15, 1924 to Charles Robert and Vivia Buchanan Helfrecht in Twin Falls, Idaho. She was raised in Twin Falls with her brother Jack, and graduated from Twin Falls High School before attending Idaho State University at Pocatello, Idaho. Gwen married William Smith Luke, who she had known since Junior High School, on March 14, 1944 in Sioux City, Iowa, during the first part of World War II, while Bill was in the Army Air Force. They were later sealed in the LDS Salt Lake Temple. She is survived by their three children: Robert (Eileen), Kenmore, Washington; Gary (Suzanne), Salt Lake City, Utah; and Alicann Lunceford (Russell), Phoenix, Arizona, as well as seven grandchildren, twenty-one great grandchildren, and one great-great grandchild on the way, who all live in places from the west coast to the east coast . She was preceded in death by her husband, her parents, her brother, and one granddaughter. Gwen and Bill raised their family in Twin Falls, Idaho; Rexburg, Idaho; Burlington, Washington; and Salt Lake City, Utah. She was employed for 19 years at the University of Utah as a secretary, and then as an administrative assistant. She cherished the many friendships made during that time. Gwen loved her neighbors, friends, and Ward members while living in her condominium in Holladay, Utah, where she served on the Homeowners Board for several years. She loved gardening, her roses, and especially “weeding” her flowerbeds. She loved visiting with all her neighbors, including the little neighborhood children, to whom she would provide Werther’s candy when they visited. She served in many Ward church positions over the years, including Primary President, Young Women President, and Relief Society President. She loved serving as an instructor in all the church auxiliaries, and taught early-morning Seminary for several years. Music – especially singing – was always a very important part of Gwen’s life. Gwen and Bill served three Missions together for the Church of Jesus Christ of Latter-day Saints; the first in the California San Bernardino Mission, the second at the Washington D C Temple, and the third, a Family History Name Extraction Mission. Gwen was grateful for her good life, and for the many blessings she received. She always said that her family, her Church, and her dear friends were “the loves of my life.” She was proud of the fact that she was able to live independently in her condo through her 95th year. As Gwen’s family, we wish to thank the staffs of Pacifica Assisted Living Center – Millcreek, and Pheasant Run Alzheimer’s Special Care Center – South Jordan, for their friendly, loving and compassionate care of Gwen during her final year. Due to covid-related restrictions and concerns, no in-person Memorial Service will be held. Per her wishes, Gwen will be buried beside her husband William at The National Memorial Cemetery of Arizona, in Phoenix. In lieu of flowers, donations may be made in Gwen’s memory to either the Alzheimer’s Association (www.alz.org), or to the Susan G. Komen Breast Cancer Foundation (www.komen.org/how-to-help/donate/memorial giving). Condolences and memories can be sent to the family at: www.premierfuneral.com.

The family of Gwendolyn May Helfrecht Luke created this Life Tributes page to make it easy to share your memories.