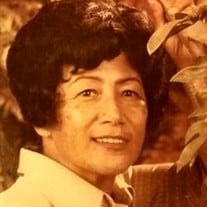 Hannah Mokihana Kawaihau passed away on Friday, July 3, 2015. She was born on April 15, 1923 in Kona, Hawaii, but she grew up in Honolulu, Oahu. She joined the army to serve as a nurse and was one of the first six women who were accepted into the armed forces in Hawaii. She was present when Pearl Harbor was bombed and recounted the historic experience to her posterity with solemnity. After being transferred to the mainland in California, Hannah married John Prior Gaddis on November 30, 1944. They were blessed with three children: Alice Fay (Norberg), Susan Carole (Ormsby) and John William Gaddis. Unfortunately, Hannah’s husband was killed in a car accident two months after their third baby’s birth. Some years later, Hannah remarried to Eugene Snyder and was again blessed with two sons: Layne Dean Snyder and Jack Lewis Snyder. Hannah worked to finish her education as a nurse and graduated with her LPN degree. She worked in several hospitals in Hawaii and California. She made her patients feel special, often using her one day off to go back to the hospital and spend time with those who had no visitors during the week. Hannah was known for her generous aloha spirit, her great work ethic, her sense of humor, love of Hawaii and Hawaiian culture, music and dance.She taught herself to play the ukulele and guitar as a teenager; and could often be found singing and playing her Hawaiian music. She was an excellent cook and was famous for her Mokihana cookies. As a mother she made many sacrifices for her children and continued to serve and bless their lives for many years. She had a great love of reading and passed that love along to her children, encouraging them to get an education. She had a strong determined spirit which enabled her to endure and overcome the many challenges in her life. Hannah is preceded in death by her husband John Gaddis, her second husband, Eugene Guy Snyder, and her three older sisters, Betsy, Martha, and Rose. She leaves behind a legacy of five children, Alice (Bill) Norberg, Susan (Victory) Ormsby, John (Vernie) Gaddis, Layne (Angela) Snyder, and Jack Snyder; thirteen grandchildren; and eighteen great grandchildren. We will miss our mother, grandmother, and “tutu.” Memorial Services 9:00 am, Tuesday, July 7, 2015 at the LDS Ward Chapel at 50 South 800 East, Orem, UT. Graveside services with military honors 11:00 am, Tuesday, July 7, 2015 at the Utah Veterans Memorial Park, 17111 So. Camp Williams Road, Bluffdale, UT.

Hannah Mokihana Kawaihau passed away on Friday, July 3, 2015. She was born on April 15, 1923 in Kona, Hawaii, but she grew up in Honolulu, Oahu. She joined the army to serve as a nurse and was one of the first six women who were accepted into... View Obituary & Service Information

The family of Hannah Mokihana Kawaihau created this Life Tributes page to make it easy to share your memories.