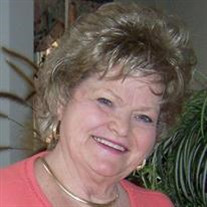 Hannelore Ursula Joneleit Peterson, 82, passed away peacefully May 4, 2019 at her home in Sandy, Utah of COPD. She was born February 26, 1937 in Memel, Germany to Johann Janis Joneleit and Betty Lotte Dubbins. She is survived by her husband, Marlon Hardy Peterson; daughters, Annie Passey (Wynn), Birgit Beilenhoff (Wolfgang), Annette Pettersson (David), Jennifer Udseth (James); 14 grandchildren; 18 great-grandchildren, and sister, Elfriedee. Hannelore was the youngest of 3 girls. Her older sisters, Elfriede “Elfi,” still lives in Germany and her second oldest sister, Jutta, preceded her in returning to her heavenly home. Hannelore had many talents. She was an expert seamstress as well as an expert in crocheting, knitting, and embroidery. She loved to darn socks and was meticulous in doing a neat pattern in many different colors. One time she took in ironing, but so many people wanted her to do their clothes, she could not handle the work load. In 1977 she met the love of her life, and a new journey began when they moved to New Mexico with a Sno Cone business “Sno Shack.” She began her own business, “HANNELORE’s HARVEST” where she gathered wild flowers across the New Mexico deserts and mountains, and pressing them to make intricate framed art pictures, and selling them from Japan to Europe and across the USA. She loved gem stones, turquois and aqua marine were some of her favorites. She strung beads and assembled many silver necklaces. She was also an excellent cook, and had a “green thumb!” She worked for National SemiConductor Co. in Salt Lake City, and later for Intel Corp. in Rio Rancho, New Mexico for 10 years. Prior to coming to America, she was active in the Church of Jesus Christ of Latter-day Saints, and held many callings and enjoyed serving others, always willing to give and care for people. She was a hard worker and enjoyed learning different skills. She was a perfectionist and an organizer, with everything in its place. Funeral services will be held Thursday, May 9th, 11:00 am at the Sandy 16th Ward, 275 E. 10600 So. Sandy, with a viewing prior to services from 10 – 10:45 am. Where family and friends may come and pay their respects.

Hannelore Ursula Joneleit Peterson, 82, passed away peacefully May 4, 2019 at her home in Sandy, Utah of COPD. She was born February 26, 1937 in Memel, Germany to Johann Janis Joneleit and Betty Lotte Dubbins. She is survived by her husband,... View Obituary & Service Information

The family of Hannelore Ursula Peterson created this Life Tributes page to make it easy to share your memories.