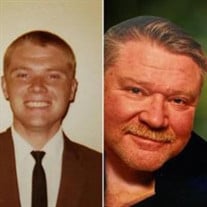 Harold Max Cutler Jr. September 16, 1949 - October 31, 2021 Hal, the second of three children, and only boy, born on September 16, 1949 in Marion, Indiana where his dad was finishing graduate school. In the 1950’s he was an intensely curious child with a brilliant mind and an abundance of boyhood energy. He was always running, and mischief making. In the 1960’s, practical and crew-cut wearing Hal played the sousaphone at East High School”s band and continued at University of Utah’s marching band. He loved afternoon football with his friends, joined ROTC and married the beautiful Michele Nielsen in the Salt Lake Temple. He immensely enjoyed time with his dad, playing games and in hours and hours of deep discussion. In the 1970’s his three daughters were born. He and his girls loved to play Tickle Bee and Horsey. He worked in the SL County Jail, the SLC fire department, as a Security Supervisor for LDS Hospital while he finished school - receiving a BS in Physical Anthropology from University of Utah. Next he was a Deputy for Davis County Sheriff’s Office, and finally the job he most wanted, an officer for the Sandy City Police Department, where he had the delight of being “Officer Friendly” for the elementary schools. In the 1980’s he wrote a column for the Green Sheet newspaper titled “Officer Occiput”, and played countless card games and Blind Man’s Bluff with his daughters. He threw epic Halloween parties. He was promoted from patrol officer to detective, specializing in counterfeit money, fingerprint and handwriting analysis, hazmat, and pepper spray education and taught high school drivers safety. The decade ended with the marriage of his oldest daughter and he soon became Grandpa Dinosaur. In the 1990’s he could be found fossil hunting, shooting “dead trees” or short story writing. His youngest two daughters married and two more grandchildren were born. He worked mall security in the evenings and was always up for a funny movie. 2000’s brought retirement from Sandy City and he became a court bailiff. His remaining five grandchildren were born and the marriage of his oldest grandchild. He worked, read, loved crossword puzzles, and traveled to Alaska. His favorite calling in the church was teaching gospel doctrine. 2010’s. Through every decade his character revealed him as honest and generous. He constantly reminded his “sweeties” (daughters and wife) he adored them. He was compelled to share a joke with every cashier and in every public interaction (along with cans of pepper spray and cash). He believed in following the example of Jesus Christ. Early in this decade he began in earnest the long goodbye of Alzehimers and on October 31, 2021 he returned to his heavenly family and more long talks with his dad. He lived his childhood dream of being Superman, often saying “I just want to help people”, showered the love of his life with flowers and anything that reminded him of her sparkle. He liked to make life just a little more magical with treasure hunts, ridiculously sized chocolate bars and flying money. He is survived by his wife Michele Nielsen Cutler, sister Pam Larew, daughters Angie (Chris) Jenson, Melanie (Adam) Kunz, Natalie (Travis) Hunt. 9 grandchildren: Lyndi (Paul) Jenson Jones (31), Chad Jenson (27), Maylie Kunz (22), Jaxden Kunz (18), Noah Hunt (17), Kembrie Kunz (15), Mia Hunt (15), McKaisley Kunz (13), and Orion Hunt (12). 1 great-grandchild: Grace Jones (4). Preceded by his parents and oldest sister. Private services will be held by his family, with interment at Crescent City Cemetery, Sandy, Utah.

The family of Harold "Hal" Max Cutler created this Life Tributes page to make it easy to share your memories.