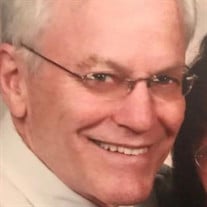 Harry Lynn Gehring August 14, 1942 - December 22, 2020 Lynn passed away peacefully on December 22, 2020 at the George Wahlen Veterans Home, in Ogden, Utah. He lost his long battle with Lewy Body Parkinsons and complications of Bi-Polar Disorder. Lynn married Joanne Rupp on October 6, 1961, and they had three sons, Allan, Gregg and Rick. Later he met the love of his life and with great hope for their future, he married Rachel Garcia-Gehring, on November 15, 2000. Rachel is a saint who lovingly cared for him as his health deteriorated. He loved sports, and was a fanatic for University of Utah Football and Basketball. He passed on his love of sports, and the University of Utah, to his sons. For several years he had season tickets to University of Utah Football, which was a favorite activity he shared with his sons. Lynn graduated from Granite High School, where he played on the Basketball and Baseball teams. After High School, he joined the Utah Army National Guard, and served 38 years before retiring. He then went on to work for the State of Utah, Work Force Services. Lynn was preceded in death by his parents, Harry Hyrum Gehring and Helen Elizabeth Erickson. He is survived by his wife Rachel, Sister Barbra (Jerry) Shutt, and his three sons, Allan (Jill), Gregg and Rick (Jen). He had 9 Grandchildren and 6 Great Grandchildren. He was a kind, gentle, quiet man who will be missed by all who loved him. The family would like to extend their appreciation to Caregiver Support Network and their CNA's and nurses, for the past four years of care they gave to Harry in South Jordan and Providence. An Inurnment with military honors will take place on Friday, January 8, 2021 at 1:00 p.m. at the Utah Veterans Memorial Park, 17111 S. Camp Williams Road, Bluffdale, Utah.

The family of Harry Lynn Gehring created this Life Tributes page to make it easy to share your memories.