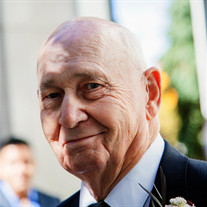 Harry Shirl Wright (84) in his typical way quietly passed into the arms of our Heavenly Father on March 15th, 2019. He was the son of Harry Shirley Wright and Ethel Verona Wright. Shirl grew up in Midvale, Utah with his parents, sister, and beloved dog, Lady. He graduated from Jordan High School in 1952, and then attended the University of Utah where he graduated with a degree in Business. He was a member of the ROTC and graduated with the honor of Distinguished Military Student. He served an honorable mission in the Northwestern States and upon his return married the love of his life, Gloria Speakman, in the Salt Lake Temple. He was stationed at Ft. Benning, Georgia, where he served as a 2nd Lt. and pistol instructor. Later, he served as a member of the U.S. Army Reserve achieving the title of Captain. He retired from the reserve with a medical discharge after a serious automobile accident. However, throughout his life he fondly remembered his military service and was always proud to have been a soldier. Shirl worked in commercial real estate development but loved gardening and being a gentleman farmer. He was also an avid outdoorsman and was the happiest hiking in the mountains or spending time on a lake or stream with his fishing pole in hand. He was a man who always had a cap on his head, a pen in his pocket, and a planner in his hand. He was a devoted member of the Church of Jesus Christ of Latter-day Saints, loved the gospel, and had a strong testimony, spending his entire adult life serving in the church, five years as bishop. Shirl loved his family and is survived by his wife of 61 years, Gloria; his five children, Bryan (Heidi), Camron (Alicyn), Gayle (Mike) Reschke, Lori (Paul) Day, Kristen (Blake) Christensen; and his sister, Shirley Wright. He will also be fondly remembered by his eighteen grandchildren, nine great-grandchildren. Funeral services will be held at 12 noon on Friday, March 22, at 507 West 700 North, American Fork, Utah, 84003. A viewing will be held before the service from 10:30 am to 11:45 am. Interment will be at the Midvale, Utah cemetery. Thanks to Dr. Von Welch and to Symbii Hospice, especially Dana and Candace for their love and care over the past months.

Harry Shirl Wright (84) in his typical way quietly passed into the arms of our Heavenly Father on March 15th, 2019. He was the son of Harry Shirley Wright and Ethel Verona Wright. Shirl grew up in Midvale, Utah with his parents, sister, and... View Obituary & Service Information

The family of Harry Shirl Wright created this Life Tributes page to make it easy to share your memories.

Harry Shirl Wright (84) in his typical way quietly passed into...