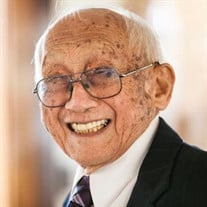 Haruo “Huck”Yamasaki 1919 - 2017 Haruo (Huck) Yamasaki, 98, passed away on December 31, 2017. The oldest of 7 children born to Jinroku and Yasuyo Yamasaki, Huck was born on February 15, 1919 in Sugar City, Idaho. He attended elementary school in Sugar City and Wilford and went on to graduate from Sugar Salem High School. He helped support his siblings and parents by farming in Sugar City and then Wilford, Idaho. Huck married Yaeko Miyasaki on March 26, 1949 in the Rexburg 4th Ward. They were sealed in the Idaho Falls Temple on August 26, 1959. In 1962 Huck sold the farm, moved his family to Idaho Falls, Idaho and worked for several years as an insurance agent for the Farm Bureau and Lincoln National. He also owned and managed apartment houses. He was an active member of the Church of Jesus Christ of Latter Day Saints, serving in ward and stake positions. He once coached the Wilford Ward softball team to the all-church tournament in Salt Lake City. He served in the St. Anthony Lion’s Club for many years and was president of the Rexburg and Idaho Falls Japanese-American Citizens’ League (JACL) five different times. He served a church history mission with his wife in Salt Lake City. His hobbies and interests included fishing, hunting and golfing. He is survived by daughters Carol (Robert) Hoki of Lecanto, Florida and Diane (Don) Maruji of West Valley City, Utah, 9 Grandchildren and 36 great-grandchildren. He is also survived by Sumi Minato of Seattle, Washington, Yuki Namba of Draper, Utah, Toshio Yamasaki and Gene Yamasaki both of Long Beach, California. Funeral services will be held on11:00 am, Monday, January 8, 2018 at the Mountain Point 1st Ward, 498 E Hollow Creek Road, Draper, Utah. A viewing will be held that morning prior to services from 9:45 to 10:45 AM. Graveside services and interment 12:30 pm, Tuesday, January 9, 2018 at the Rexburg City Cemetery, Rexburg, Idaho.

The family of Haruo "Huck" Yamasaki created this Life Tributes page to make it easy to share your memories.