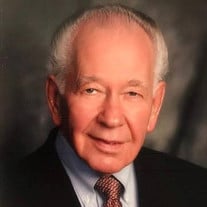 Our beloved father, grandfather, and great grandfather, Harvey Douglas Goff, Sr, 92, of Ogden, Utah, passed away peacefully at his home on Saturday, 1 December 2018, of natural causes. Known earlier in life by family and longtime friends as Doug, and Harvey in professional settings and later in life, Harvey Douglas was born 21 February 1926, in Bingham Canyon, Utah, the second of two children born to Harvey Lorenzo Goff and Ina (Inez) Marie Elvera Dahlstrom. He graduated from Bingham High School in 1944. In January of his Senior year he enlisted in the U.S. Army Air Forces on condition that he would not be called to active duty until after graduation. He received gunnery training for B-29 bombers and eventually became an instructor. Because the war was winding down, he didn’t serve overseas but was stationed in multiple locations in the U.S. He was honorably discharged in June 1946. Using the G.I. Bill, Harvey Douglas attended Brigham Young University, graduating with a B.S. in 1949. He later attended Harvard Business School, graduating with an M.B.A. in 1951. Harvey Douglas married Francis Valene Rasmussen on 7 September 1949 in the Salt Lake Temple. They had two children and divorced in 1954. After moving to New Jersey, he was introduced to Eva Margene Steiner in 1955 as she was traveling home at the conclusion of serving in the Swiss-Austrian Mission. Following a long-distance relationship between New Jersey and Utah, they became engaged through the mail. They were married on 28 December 1956 in the Salt Lake Temple. They initially lived in New Jersey where their six children were born. After graduating from Harvard, Harvey Douglas worked at Elizabethtown Water Company in New Jersey. In 1969 he was offered the position of financial vice president with Amalgamated Sugar Company in Ogden. He and Margene chose to return to Utah to be closer to extended family. He worked at various other companies and concluded his working career with the Utah State Department of Commerce. Harvey Douglas was an active member of The Church of Jesus Christ of Latter-day Saints. He had the privilege of baptizing his mother in 1947 in the Salt Lake Tabernacle. He served in many different Church callings, including stake missionary in the New York New York Stake, ward clerk, and high priests group leader. He and Margene served a 30-month mission in the Ogden 4th Ward in the mid-1990s. They also served as ordinance workers in the Ogden Temple. He was devoted to his family. He relished family gatherings and keeping the family united through a regular newsletter. He loved painting, yard work, home improvements, and photography. He particularly enjoyed writing poetry, creating witty, heartfelt verses for special family events and holidays. His family prizes his four published books of poetry. Later in life he and Margene enjoyed traveling, one particular highlight being a 50th wedding anniversary cruise with family to Mexico. He was also involved with the Kiwanis Club. Following a serious injury in 2016, he remained a remarkable example of enduring to the end, without complaint, in the face of tremendous adversity. He will be lovingly remembered for his quiet example, tender heart, and abiding faith in the Restored Gospel of Jesus Christ. Harvey Douglas was preceded in death in 2017 by his wife of 60 years, Eva Margene Steiner; his parents, Harvey and Inez Goff; and his brother, Robert “D” Goff. He is survived by eight children, two from his first marriage: Craig (Nancy) Crocker, Mesa, AZ; Cheri (Larry) Winzeler, Heber City, UT; and six with Margene: Harvey Douglas (Lisa) Goff, Jr., Ogden, UT; David Reed (Carlin) Goff, Ogden, UT; Steven Duane (Colette) Goff, Uintah, UT; Carolee (Art) Brothers, Park City, UT; Lorinda (Brent) Belnap, Accra, Ghana; and Darrell Eugene (Tricia) Goff, Highland, UT; plus 33 grandchildren and 29 great grandchildren. The viewing will be held on Thursday, 6 December, at the Weber Heights Stake Center, 1401 Country Hills Drive, Ogden, from 6:00 to 8:00 p.m., and on Friday, 7 December, from 9:30 to 10:30 a.m., followed by funeral services at 11:00 a.m. Interment with military honors will be in the Memorial Gardens of the Wasatch, South Ogden. The family wishes to especially thank Tambi Trimble for faithfully caring for their father for over two years with love, dignity, and respect. The family also expresses its deep gratitude to the elders and priests of the Forest Green Ward for transporting him each week to and from Church in his final years. In lieu of flowers, the family suggests donations be made to the Missionary Fund of The Church of Jesus Christ of Latter-day Saints.

Our beloved father, grandfather, and great grandfather, Harvey Douglas Goff, Sr, 92, of Ogden, Utah, passed away peacefully at his home on Saturday, 1 December 2018, of natural causes. Known earlier in life by family and longtime friends as... View Obituary & Service Information

The family of Harvey Douglas Goff created this Life Tributes page to make it easy to share your memories.