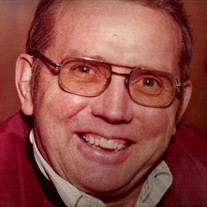 Harvey Sorensen Lloyd 8/15/24 – 7/12/16 ur wonderful husband and father Harvey Lloyd passed away peacefully at his daughter’s home in West Jordan, Utah on July 12, 2016. Harvey was born on August 15, 1924 at the family farm in Central, Idaho to Ellis and Mary (Sorensen) Lloyd. Harvey and his father installed the first sprinkler irrigation system in the area and used the first commercial fertilizer on their grain fields. Harvey served in the Navy during World War II. He was stationed in the Philippines where he served as a ship repair mechanic. He married Jean Bagley in the Salt Lake LDS temple on June 3, 1950. They spent the first 10 years of married life running the family farm in Central, Idaho. They then made their home in Cottonwood (Holladay), Utah. Harvey worked as a farmer, builder, and in public relations. Harvey spent many years with Snarr Advertising, and then Positive Thinking Rallies. He loved the years spent traveling with his wife in their motorhome. He had great skills with his hands and could build and repair anything. In his spare time he created beautiful silverwork, woodwork and bolo ties. Harvey was well known for his service to others, most especially to his neighbors. His handmade grills were used for many a neighborhood, ward, or family pancake and scone cookout. He also worked at the Jordan River Temple giving tours of the grounds with his wife for 6 years, and 2 years as a temple ordinance worker. Harvey’s children, grandchildren and great-grandchildren were the pride and joy of his life. He loved mentoring them. Harvey is survived by his wife of 61 years and children Robert (Sharon), Marianne (H. Lee Sleight), Jennifer (Nathan Andelin) and Paul (Wendy), sister Marjorie Dana, 15 grandchildren, and 34 great-grandchildren. He is preceded in death by his parents, brothers Evan & Homer and sisters Eva & Elaine, and granddaughter Katie Lloyd. A funeral service to celebrate Harvey’s life will be held at 11 am on Saturday July 16, 2016 at the Big Cottonwood 14th Ward LDS Chapel, 2080 E 5165 S, Holladay, Utah where a viewing will be Friday from 6:00 to 8:00 pm and prior to services from 9:00 to 10:30 am. Interment at Elysian Burial Gardens.

The family of Harvey Sorensen Lloyd created this Life Tributes page to make it easy to share your memories.