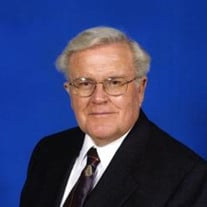 Harvey “Harv” Merrill Croft passed away February 27, 2015 surrounded by family. Born January 5, 1935 to Buford William and Edna May Merrill Croft in Billings, Montana. Harv married Hazel Kaye Binks in the Salt Lake Temple September 6, 1957. He was active in the LDS church and served in many callings including Bishop, Scout Master, Teacher, Temple Ordinance Worker, and Home Teacher. He and Kaye served in the Cove Fort Historical Site Mission. He was devoted to his family and worked hard to provide for them. For him, it was important that Kaye be home with their children. He taught through example what it means to live a life of integrity, principle and service. He was an Eagle Scout and continued his involvement in Scouting his entire life. He enjoyed camping, riding motorcycles, and woodworking. Harv was a Russian interpreter in the US Air Force. He was a school teacher by trade and also worked as a construction estimator. He is survived by his wife Kaye, children Laura Croft Maw (Ron Batt), Kathryn Creer (Paul), William Richard Croft (Susan), and Lisa Miller (Brian), 14 grandchildren, 2 great-grandchildren, and sisters Marilyn Lewis and Margaret Gant. Services will be 11:00 a.m., Saturday, March 14, 2015 at the Lehi 49th Ward meeting house, 3180 North 300 West, Lehi, Utah with a viewing prior to the services from 9:30 to 10:30 a.m. Interment with military rites will be at the Springville Evergreen Cemetery.

The family of Harvey "Harv" Merrill Croft created this Life Tributes page to make it easy to share your memories.