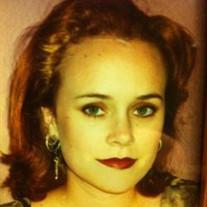 Heather Lynn Long, age 42, passed quietly surrounded by her family at her parents’ home in Salem, Utah. Heather fought courageously through complications due to “graft vs host” following a successful stem cell transplant. She made the decision to come home to her parents’ home to live out her last days surrounded by friends and family. Heather left this earthly life on July 30, 2014 at 9PM. Heather was born in Fort Rucker, Alabama on March 12, 1972 to Raymond and Carolyn Long. She was the first of their four children. Throughout her life Heather had many loves and interests including, but not limited to music, art, and cooking. Heather had her own style from the way she lived to the way she ate and definitely in the way she carried herself. As a young woman she enjoyed pranks, jokes, and scaring her siblings. She would hide around corners and under beds to give someone a good fright. Before becoming too ill to work, Heather was employed as a hospice nurse in East Falmouth, Massachusetts. The Long family lived in many places as the family grew and followed Raymond in his FAA career. One of her favorite places that their family lived was Grand Junction, Colorado. In 1995 Heather met Christian Thornton through a mutual friend. They lived together in the Bay area of California followed by a move to Washington, DC. On May 13, 1998 Heather and Christian welcomed a beautiful baby boy, Miles, into their lives. Eventually, Heather and Christian went their separate ways, but they remained very close friends. When Christian took on the adventure of purchasing a restaurant in Martha’s Vineyard, Heather and Miles moved to East Falmouth, Massachusetts to allow Miles to be close to both sides of his family. Heather returned home with her parents to Salem, Utah to recover from surgery. Shortly after arriving in Utah she began her battle with “graft vs host” that would eventually cut her life short. Heather is survived by her son, Miles Ian Thornton, her parents Raymond Marvin Long and Carolyn Diane Long, her sisters, Holly Rae Zahand and Heidi Anne Case, her brother Jeffery Alan Long, as well as many nieces, nephews, cousins, aunts, uncles, friends, a brother-in-law, and a very fat cat named Kit Cat. Heather was welcomed home into heaven by her grandparents, E.C. Long, Sr., Leatrice Walter Long, Nathaniel Preston Greene, and Helen Bernice Greene. Those who would like to pay their respects may attend Heather’s viewing on Friday August 1st, 2014 from 5-7PM at The Church of Jesus Christ of Latter Day Saints located at 60 South Main St. Salem, Utah. Funeral services will take place on Saturday August 2nd, 2014 starting at 10AM at the same location. Graveside services for family and close friends will take place at the Salem Cemetery located off of 160 East around 1000 South in Salem, Utah following the services. A small reception for family and close friends, to celebrate Heather’s life, will follow the graveside services at the same location as the services. Bishop Garrett Johnson will conduct the funeral services. Raymond M. Long will offer the eulogy at Heather’s request. Lloyd Hegland will dedicate the grave. The pallbearers will be Jeffery A. Long, Jeffery K. Long, Miles I. Thornton, Christian J. Thornton, Derrick E. Zahand, Jared M. Case, Kenneth W. Long, and Sean M. Pederson. Lloyd Hegland, Raymond M. Long, and John Bell will act as honorary pallbearers. All funeral arrangements are being managed by Premier Funeral Services of SLC and Orem, Utah. If you are unable to attend, but would like to send flowers they may be sent to The Church of Jesus Christ of Latter Day Saints located at 60 South Main St. Salem, Utah 84653 and should be delivered after 4:00PM on Friday August 1st. If there are any further questions guests, family, and friends may call 801-504-6148. Special thanks to Brighton Hospice for their help and support. To have a loving relationship with a sister is not simply to have a buddy or a confident... it is to have a soul mate for life. - Victoria Secunda A sister is a gift to the heart, A friend to the spirit, A golden thread to the meaning of life. - Isadora James A sister can be seen as someone who is both ourselves and very much not ourselves -- a special kind of double. - Toni Morrison Sisters annoy, interfere, criticize. Indulge in monumental sulks, in huffs, in snide remarks. Borrow. Break. Monopolize the bathroom. Are always underfoot. But if catastrophe should strike, sisters are there. Defending you against all comers. - Pam Brown If you don't understand how a woman could both love her sister dearly and want to wring her neck at the same time, then you were probably an only child. - Linda Sunshine

The family of Heather Lynn Long created this Life Tributes page to make it easy to share your memories.