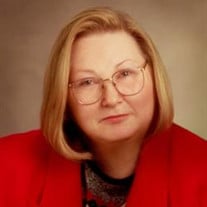 Helen Beth Lacy-Smith finished her mission here on Earth and returned to her Heavenly Father on September 15, 2015. She will be reuniting to her father, Hal Arnold Lacy andmother, Margaret Mary (Samuels), her many beloved cats and other family and friends she has not seen in a long time. Helen was born in Burbank, CA. She graduated from the University of Utah with a bachelors in sociology in 1972. Education continued to be an important part of Helen’s life. She would go on to retire from the University of Utah as Director of IMS after 43 years in 2011. She always encouraged her family and friends to pursue all avenues of continuing education. The University played another very important role in Helen’s life as it was there she met her one true love, husband – Donald Eugene Smith. After a 10 years of courtship they were married on June 10, 1978. They were later sealed for time and all eternity in the Salt Lake City Temple on March 27, 1998. She was fiercely devoted to Don andthey had an incredible love that has been an inspiration to all of their family and friends. Helen always put her family first, having a very special place in her heart when it came to the five children of her heart: John, Cheryl, Kearin, Jay and James. Helen found joy in traveling with Don around the globe, but they had a special fondness for Hawaii returning many times. Helen was dedicated to a host of hobbies and interests including gardening, cooking and entertaining, the symphony, fusion glass, her cats and of course all things Christmas, which she passed on to many of her family members. She was first and foremost devoted to her family. She was a faithful and devoted member of The Church of Jesus Christ of Latter Day Saints. Her testimony and faith was something that shined brightly and was an inspiration to so many. She is survived by her husband of 37 years, Don, her children: John Pyle of San Diego, Cheryl Gardner-Mayo of Las Vegas, Kearin (Gardner) Stroud of Suisun City, California, Jay Pascoe of Columbus, Ohio, and James Pascoe of Duluth, Minnesota, 4 grandchildren: Denai Bowerbank of Las Vegas, Moyra Anthony of Billings, Montana, Cassandra Taylor of Pittsburg, California and Jonathan Stroud of Suisun City, California, and 5 great grandchildren: Ryland Jay and Emma Helen Bowerbank, Mya Abigail and Morgan Annemarie Anthony and Madalyn Isabella Pearl Taylor. We will remember her smile, her warmth, her energy, her love for life, family and friends, but also students, colleagues and clients, many of whom over time also became friends. She worked very hard all her life, up until the very end. She made a difference in the lives of many. We invite you to join us and celebrate together. Funeral services will be 11:00 am, Monday, September 21, 2015 at The Church of Jesus Christ of Latter-day Saints, 860 Downington Avenue, SLC, UT with a viewing prior to services from 9:30 to 10:45 am. Private interment following at Mount Olivet Cemetery. In lieu of flowers, a donation to the University of Utah in Helen's name would be appreciated.

Helen Beth Lacy-Smith finished her mission here on Earth and returned to her Heavenly Father on September 15, 2015. She will be reuniting to her father, Hal Arnold Lacy andmother, Margaret Mary (Samuels), her many beloved cats and other family... View Obituary & Service Information

The family of Helen Beth Lacy-Smith created this Life Tributes page to make it easy to share your memories.

Helen Beth Lacy-Smith finished her mission here on Earth and...