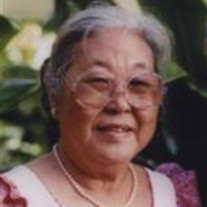 Helen “Lorraine” Fujimoto Abo, 84, formerly of Aiea, Hawaii, passed away peacefully on Friday, August 6, 2010 at the home of her daughter in American Fork, Utah. Lorraine was born May 17, 1926 in Aiea, Hawaii to Kinguma Fujimoto and Kikuno Hashimoto. She was married to Tomosue Abo on January 11, 1957 in the Laie, Hawaii Temple. After graduating from the University of Hawaii with a degree in Home Economics, she taught homemaking at Leilehua High School. Lorraine was a loving wife and mother, serving alongside her husband as he served as Mission President of the Japan Tokyo Mission from 1971 to 1974, as a member of the Stake Presidency and later as a Stake President of the Honolulu Hawaii West Stake from 1975 to 1990, and as the Japan Tokyo Temple President from 1991 to 1992. Those who knew her will miss her kind and loving nature. She was a woman who emulated her deep religious beliefs in her daily actions of love and care for those around her. Although we miss her, we know that she has gone to a better place, joining her husband Tomo, who passed away in 2008. She is survived by her daughters, Nan (Jon) Healy, Joye Lefrandt, and Fay (Michael) Francis; sons, Ben Abo and Todd (Cynthia) Abo; and 13 grandchildren, Curtis (Misty) Lefrandt, Nanette Lefrandt, Jason Lefrandt, Wade Healy, Travis Lefrandt, Kathryn Healy, Christian Abo, Natalie Lefrandt, Kalin Abo, Kai Abo, Covey Abo, Cache Abo and Kalia Abo. She was recently blessed with a great granddaughter, Liahona Lefrandt. She was preceded in death by her husband, brother, Toshio “Casey” Fujimoto, and sister, Toshie Muromachi. The family will receive family and friends between 6-8 p.m. on Friday, August 13th at the home of his son, Todd Abo at 599 West 990 North in American Fork, UT. Funeral Services will be held in Aiea, Hawaii at the Church of Jesus Christ of Latter-Day Saints Pearlridge Chapel. Burial will be at Mililani Mortuary Park in Mililani, Hawaii.

The family of Helen "Lorraine" Abo created this Life Tributes page to make it easy to share your memories.