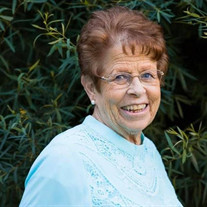 Helen Jones Rowley 1943 - 2019 Helen Jones Rowley passed away peacefully at her home surrounded by all her children on Saturday, December 28, 2019, after a courageous three year battle with Ovarian Cancer. She was born to Howard and Ula Jones on May 23, 1943 in Manti, Utah. She was the third of seven children. She had a great love and gratitude for her parents and siblings. Later her family moved to Richfield, Utah where she graduated from high school. At age 18 she moved to Salt Lake City, where she attended and later graduated cosmetology school. She met her eternal sweetheart, Robert Rowley, while attending a single’s ward. They were sealed in the Manti Temple on August 21, 1964. Together the raised six children and were blessed to participate in the Indian Placement Program, where Les joined the family, becoming the seventh child and their third son. Her family has been her greatest and most prized treasure. She was an active member of The Church of Jesus Christ of Latter Saints. She had a deep love for the Lord and served Him in many capacities. She spent years serving in various presidencies in both the Relief Society and Young Women’s, both on the ward and stake level. Together, Rob and Helen served an 18 month mission in the New Mexico, Albuquerque Mission and was a mother figure to the young Elders and Sisters of the mission. They also served as service missionaries at the Conference Center for 9 years as well as ordinance workers at the Jordan River Temple. She was also dedicated to studying the scriptures and the gospel as well as attending the temple, doing the work for those who have passed on. Helen was the champion of compassion, love, spiritual nourishment, and creating a safe haven, not only within the walls of her own home, but outside of her home by influencing numerous families and individuals. Throughout the years she opened her door to many people with various challenges. They would come to her home to feel of her great kindness and the spirit of the Lord, and it became a safe haven for all who entered. She was able to accomplish this because of her deep understanding of the sacredness of the home. She has passed this understanding onto each of her children, which will span for generations to come. Helen dedicated her life to her husband, Rob, as well as to her children, 25 grandchildren and great grandchildren. She took every opportunity to attend family gatherings, sporting events, music and dance recitals, and high school and college graduations. She also enjoyed traveling and exploring the world, especially with family members. She will be greatly missed by all who were blessed to know her. Mom, we miss you and have been blessed to have you as our mother. You have touched our lives and the lives of our children. You have been an amazing example and we look forward to reuniting with you. We love you! She is survived by her children; Michele (Frank), Les (Jocelyn), Cynthia, Michael (Annalisa), Burt, Misty (Brandon), and Catherine (Tyler), 25 grandchildren and 2 great-grandchildren. She is proceeded in death by her husband, Robert B Rowley and her parents, Howard and Ula Jones. A viewing will be held in her honor, Sunday, January 5th, from 6:00-8:00 pm at the West Jordan Mt. View 2nd Ward Chapel (2901 West 9000 South, West Jordan) and Monday, January 6th, from 9:00-10:30. Funeral services will follow at 11:00 am. Interment will be at the Riverton Cemetery (1500 West 13200 South, Riverton). In lieu of flowers Helen requests donations to be made to the Humanitarian Center through the Church of Jesus Christ of Latter Day Saints; Huntsman Cancer Institute or Primary Children's Medical Center. The family would like to thank the care Helen received through the Utah Cancer Specialist, the hospice staff through iCare, and other professional care givers.

Helen Jones Rowley 1943 - 2019 Helen Jones Rowley passed away peacefully at her home surrounded by all her children on Saturday, December 28, 2019, after a courageous three year battle with Ovarian Cancer. She was born to Howard and Ula Jones... View Obituary & Service Information

The family of Helen Jones Rowley created this Life Tributes page to make it easy to share your memories.